Everything You Need To Know About Lava Zones, Real Estate, and the Big Island of Hawaii

There’s an old joke I reference on occasion about the grandson coming to his grandfather for investment advice, to which the grandfather answers, “Boy, invest in dirt. They stopped making that a long time ago.”

Well, as it turns out, the grandfather is only MOSTLY correct. Hawaii is one of the few places in the world which is still manufacturing dirt, thanks to the fact that the entire island chain is home to active volcanoes — those being Kilauea, Mauna Loa, Hualalai, and the currently-dormant Mauna Kea — which periodically erupt and pour out enough lava to add another acre or two to the landscape. In fact, in 2018, Kilauea added almost 900 acres of new land to the Big Island! Unfortunately, all that molten rock flowing over the land does tend to have an effect on the real estate market, and not in a ‘hurray there’s more land to sell’ way.

The first thing to know about lava zones is that there isn’t any place on the Big Island that is NOT a lava zone. This comes from the whole island being made of lava flow stacked upon lava flow over the course of several dozens of centuries. There are a total of 9 zones on the Big Island, and they are described by the State as the following: 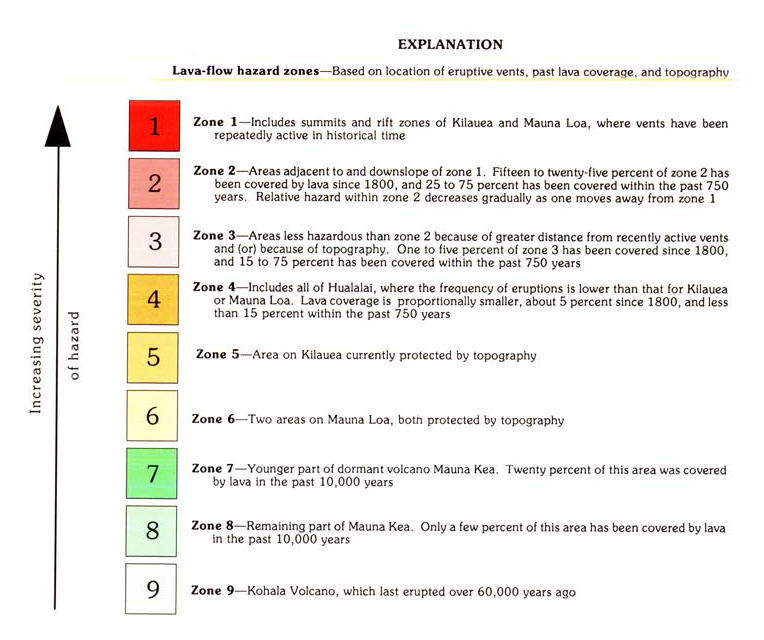 Now, all of that looks like a lot to take in, and it is. Fortunately, when it comes to investing in real-estate on the Big Island, the only zones that you need to worry about are zones 1 and 2. Zones 3-9 are considered “low risk” due to being protected by topographical barriers, being down-slope from the dormant Mauna Kea, or by virtue of not having been overrun by lava in the last couple of centuries.

The Golden Question: Is it Insurable?

It can be extremely difficult to get financing when looking at property in either zone because it is extremely difficult to get insurance on any property located in zones 1 or 2. That is not to say you can’t find companies who will issue policies, but currently there are only two which offer them consistently for properties located in those zones. Other companies may offer policies sporadically or on an individual case-by-case basis, but they are not well-advertised, and you will have to do some deep digging with local insurance agents in order to find them.

The first company which consistently offers policies for lava zones 1 and 2 is Lloyd’s of London, but Lloyd’s does not issue fire insurance policies, which is one of the more pressing needs when you live in a dangerous lava zone. Case in point, when Fissure 8 opened up in Leilani Estates back in 2018, many of the houses that were destroyed did not have fire insurance, and so were almost total losses. So while it may be useful to have Lloyd’s insure your property for financing purposes, if your property is destroyed by lava, Lloyd’s will likely not cover the damages. 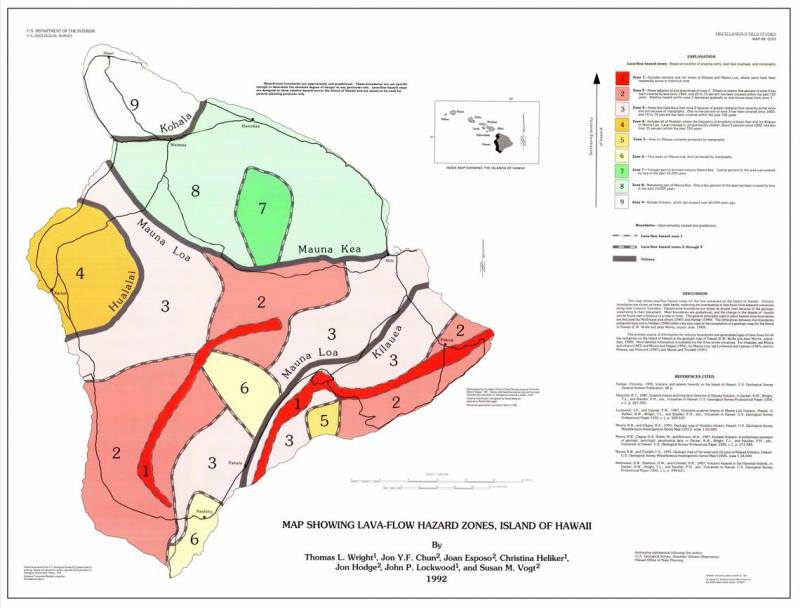 The second insurance company that will consistently issue policies — including fire insurance — is the state-run Hawaii Property Insurance Association, or HPIA. Unfortunately, this is something of a “last resort” insurance provider in that it was specifically set up by the state of Hawaii for those living unable to get insurance anywhere else. HPIA premiums start at around four times the cost of other policies and only go up from there.

What about Lava Zone 3?

It is also worth noting that Lava Zone 3 does not seem to have the same stigma in the insurance world as the first two zones. Recent rate raises in HPIA policies only affected those policies which cover properties in zones 1 and 2, and in my research, I have found further anecdotal evidence that zone 3 is not subject to the same strenuous insurance regulations as zones 1 and 2. Your rates may be a tiny bit higher than normal for any policies you get on properties in zone 3, but you should still easily be able to find an insurance provider willing to issue a policy. Zones 4-9 have no effect on insurance whatsoever. 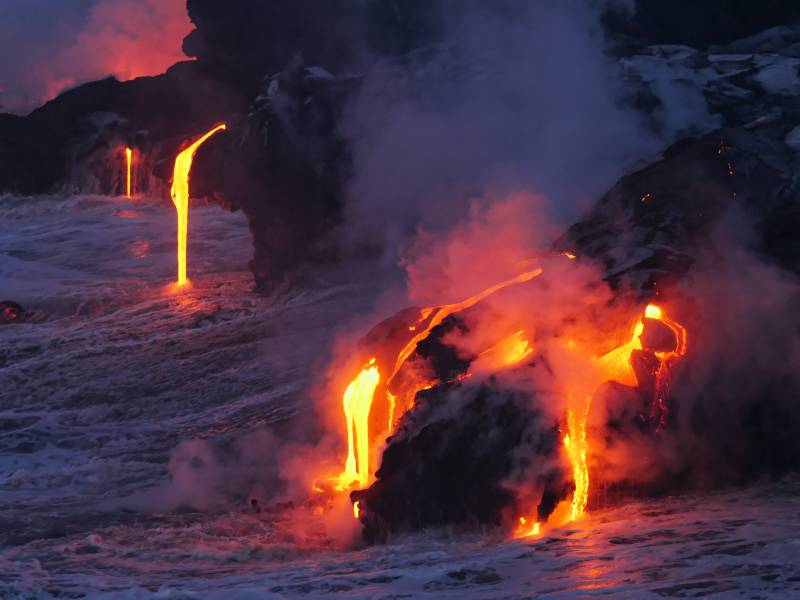 Of course, as financial guru Dave Ramsey and many others say, “Cash is King,” so if you have the cash on hand then you don’t need to worry about the insurance because you don’t need to get financing. However, that does lead to a very important consideration: The fact that property in lava zones 1 and 2 are technically always in danger of being paved under by a new flow of the Red Stuff. Any time you purchase property in those zones, you are in effect rolling the dice in hope that no new flow erupts nearby.

And that’s sort of the last word when it comes to purchasing property in lava zones 1 and 2; there’s a lot of very nice property to be had there, and much of it is in areas where lava hasn’t actually been seen in decades if not centuries. The language used in the description of lava zone 2, for instance, states that it is considered “high risk” because 25% of the land has been covered by lava since 1800. One could understandably look at the description and decide, “yeah, if only 1/4 of the land has been under lava in the last 250 years, I’m probably okay to buy something there.”

Though unlikely, there always exists the danger that lava will show up again unannounced. No one living in Leilani Estates EXPECTED Fissure 8 to open up back in 2018, but the possibility was always there, and technically it was an elevated risk because those properties existed in Lava Zone 1. It’s rare when it happens, but it DOES happen, so the decision of whether or not to purchase land in zones 1 or 2 must be based on how risk-averse you are. If you don’t mind rolling the dice on a property that has a low-percentage chance of being wiped out by lava, then there are plenty of lovely properties to purchase. If you’re more risk-averse, then likely something in zones 3-9 will be more your speed.

As a risk management minded realtor and real estate investor, I stick to the safer long-term investments and advise you to do the same. 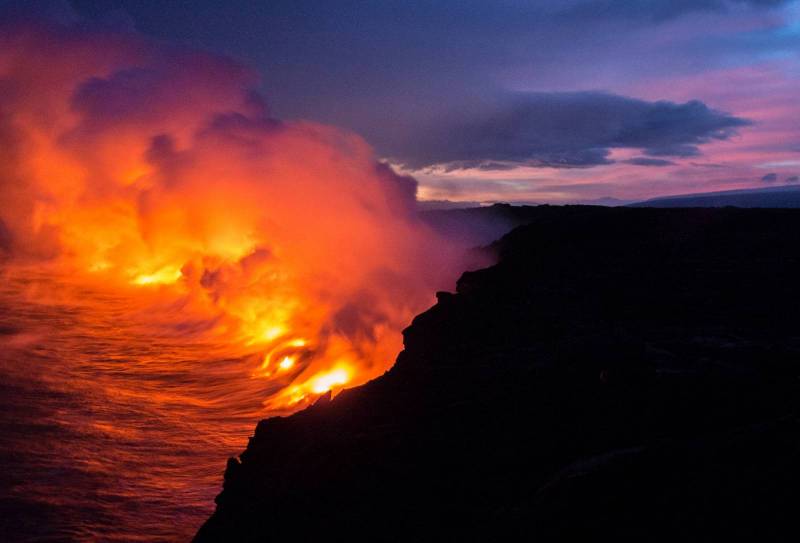 Whether you are new to real estate or you’ve been doing this for a long time, Hawaii is different than most other states. Getting help from an industry expert is really the best way to go. If you ever have a specific real estate question, just send me a quick email, call, or text. I love talking real estate, and I’m happy to help, no strings attached.

Don’t miss out; join my email list, and I’ll send my helpful Hawaii real estate blogs directly to you! 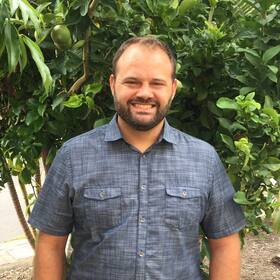 Tom Selman is a REALTOR Salesperson with Hawai'i Life. You can email me at tomselman@hawaiilife.com or via phone at (808) 209-6389.

Looking for ideally a property on the best location, Oahu, Maui, Big Island in that order. We are looking for a piece of land 1-3 acres (more is ok but not necessary). Lava zone 3 if possible. (I dont think our price range would get us 4+) 1 mile or less from the coast, if possible. No house on property as we plan to move there in a few years and build one (so power line near is good, catchment water is ok, septic tank or local sewer is ok). Road access. Price range is up to 100k but lower is of course better. We would pay cash. Please let me know if you are interested in assisting us find this. Thank you.

As Retired Geologist who worked on the Global Volcanism Project at the Smithsonian Natural History Museum I am unimpressed. I left Washington, DC in 2005 to build my home in Upper Ocean View, Hi and bring all my stuff to put in it. 17 years later I am 68 years old unafraid of any such thing as a volcanic eruption. Wildfires on the Mainland are destroying many homes with no fire zone insurance issues…crime in the big cities is even a bigger issue…investment…well that is what is at stake here and all you think of is the investment side not the living side. 17 years of bliss up here on the SW Rift Zone of Mauna Loa is way preferred to any SAFE city . Yes it is work, that is what life is all about not just the money side. Sell my House, well not through you in particular for sure. No I am going to live my life out right here watching the sunset on the Blue Pacific Ocean from 3550 feet ASL.