Hawai’i Island, also known as the Big Island, is one of the few places in the world where you can see not one, but FOUR active volcanoes. From white, snow-capped Mauna Kea to the red-hot lava lakes in Kīlauea’s crater, Hawai’i Island’s volcanoes are an undeniable reason why it attracts visitors from all over the world – Millions each year, in fact!

Visiting is one thing, but is it safe to actually live on an active volcano? It’s one of the most common questions posed to kama’aina (residents) and the short answer is a resounding, yes!

Today we’ll look at everything you need to know about the Big Island’s volcanoes and how safe it is to live on one of them! 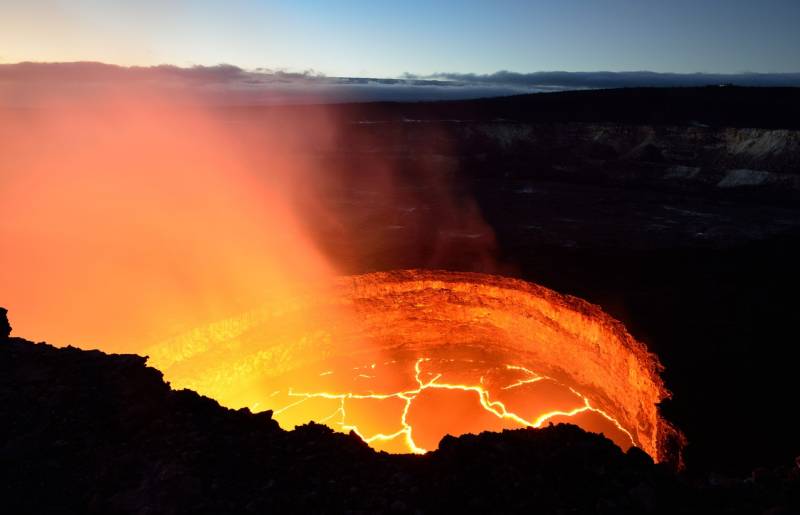 Inside the caldera in Hawaii Volcanoes National Park, Hawaii Island.

In 2010, the USGS Hawaiian Volcano Observatory (HVO) declared January as Annual Volcano Awareness Month as part of a commitment to helping local residents and visitors safely enjoy and explore the volcanoes that have formed the 4,028-square mile island of Hawai’i. Since it’s Volcano Awareness Month, there’s no better time of year to learn more about Hawai’i Island’s volcanoes than January!

Diverse and unique, the Big Island is home to a whopping six volcanoes:

Although considered an active volcano, Hualālai hasn’t erupted in over 200 years. On a clear day, the majestic summit of this sleeping giant can be seen from Kailua-Kona. And on Hualālai’s slopes, you’ll find the farms that grow much of Kona’s renowned coffee.

A classic shield volcano that makes up more than half of the Big Island, Mauna Loa is still active, but is cause for little concern these days. The USGS monitors Mauna Loa and all Hawaii’s volcanoes constantly for significant changes to their eruptive status and works closely with the County of Hawai’i Civil Defense Agency, HVO, and other local agencies to ensure public safety.

While Mount Everest is commonly referred to as the world’s tallest mountain at 29,032 feet, it pales in comparison to Hawaii’s Mauna Kea. If one were to measure the volcano from its origin on the seafloor to its summit, then its height would total 33,496  feet, making it the tallest mountain on the planet! Mauna Kea, which means “white mountain,” is at such a high altitude that it often gets snow in the winter months!

As the most active volcano in the world, the Kīlauea Volcano reigns as the most visited attraction in Hawai’i from her throne in Volcano, HI. Before taking a two-year nap, Kīlauea erupted almost continuously from 1983 to 2018.

In 2018, Kīlauea erupted from the lower East Rift Zone, reminding Hawai’i Island residents that although eruptions of Hawaii’s volcanoes are stunning and can often be safely viewed, they are also to be respected as one of Mother Nature’s most powerful forces. Currently, Kīlauea’s lava activity is confined to the Halema’uma’u crater, making it safe (and breathtaking!) to visit and live in Volcano, HI.

Most parts of Hawai’i Island have not experienced lava flows for hundreds, thousands, or tens of thousands of years. As such, the U.S. Geological Survey has mapped 9 Lava Hazard Zones based upon the location and likelihood of areas receiving near-term lava flows. Hazard Zones also take into account topographical features that could influence the direction and distribution of future lava flows.

Thanks in part to Annual Volcano Awareness Month, Hawai’i Island residents living in a low risk zone or safe zone are aware of the potential hazards that might accompany a major eruption, and are prepared to evacuate if necessary. And since eruptions occur at long intervals over many decades or even many centuries, the risk to life and property is rare and negligible.

When choosing to purchase real estate here on the island, many buyers are attracted to the scenic natural beauty, pleasant weather, and laid-back lifestyle of Lava Zones 1 and 2.  It doesn’t hurt that property located in these lava zones is much more affordable than other areas on Hawai’i Island.

If you’re considering buying real estate on Hawai’i Island, it helps to remember that the risk of injury from Hawaii’s volcanoes is far lower than the risk from other types of natural disasters such as the earthquakes, fires, and hurricanes of the mainland. In fact, volcanoes are historically responsible for the least amount of damage when compared to these other hazards.

How often do Big Island residents worry about the potential dangers of the next eruption? Certainly no more than California residents worry about the San Andreas fault’s next big earthquake. We definitely worry far less about volcanic activity than residents of the Gulf Coast or the Caribbean worry about hurricanes. And there’s no question that we worry less about eruptions than the typical Midwesterner or New England native does about blizzards, ice storms, snow-covered roads, freezing temps, and downed trees and powerlines.

Just spend the morning taking in the view from Mauna Kea before heading to the beach to sunbathe at lunch, or hike out to one of Hawai’i Volcanoes National Park’s lookouts to behold the glow of Kīlauea’s lava lake in Halema’uma’u crater, and you’ll quickly realize that rather than scaring away the masses, our three major volcanoes are attracting more visitors every year. Since they fuel much of Hawai’i Island’s thriving tourism industry, Kīlauea, Mauna Kea, and Mauna Loa alone provide an incredible benefit to the island’s community and economy. Hawai’i Volcanoes National Park, for instance, attracts thousands of visitors from around the world every year, creating a variety of jobs for local residents in the tourism industry, including work in hotels, restaurants, gift shops, and as tour guides. 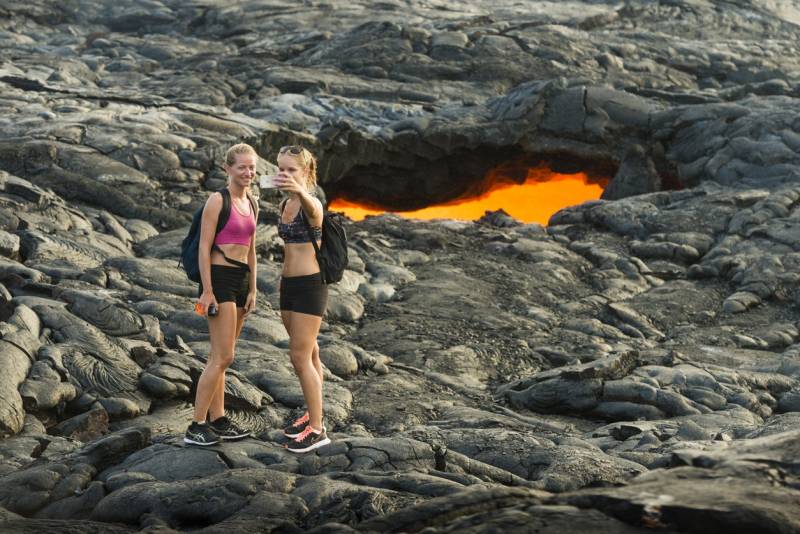 Another benefit of living on an island of volcanoes is the mineral-rich soils that result from lava and ash. This exceptionally nutrient-dense volcanic soil is ideal for growing healthy crops and yielding abundant harvests. Growing an array of food for consumption, as well as tropical plants and flowers, the Big Island boasts a thriving agricultural industry which provides countless jobs for island residents. Even amateur gardeners can show off their green thumb by growing their own flowers, fruits, and vegetables.

With all the benefits of living near an active volcano, it’s still wise to be aware that volcanoes are a force of nature that can change safe areas into risky zones. Accepting this possibility is just part of living in paradise. And considering that the overall risks for communities in a safe zone are quite small, being prudent and aware is a small price to pay to live aloha every day!

The Takeaway: There’s a good reason why so many of us live on an active volcano!

If you’ve never visited the Big Island before, it’s natural to be concerned about safety in light of volcanic activity. Rest assured, Hawai’i Island is not only a safe destination to visit, but the perfect place to live for those of us who love nature, enjoy adventure, and appreciate the laid-back, friendly, slower-paced island lifestyle!

Ask anyone who lives on the Big Island and we’ll tell you: There’s just nothing like living aloha on the big rock we call home! 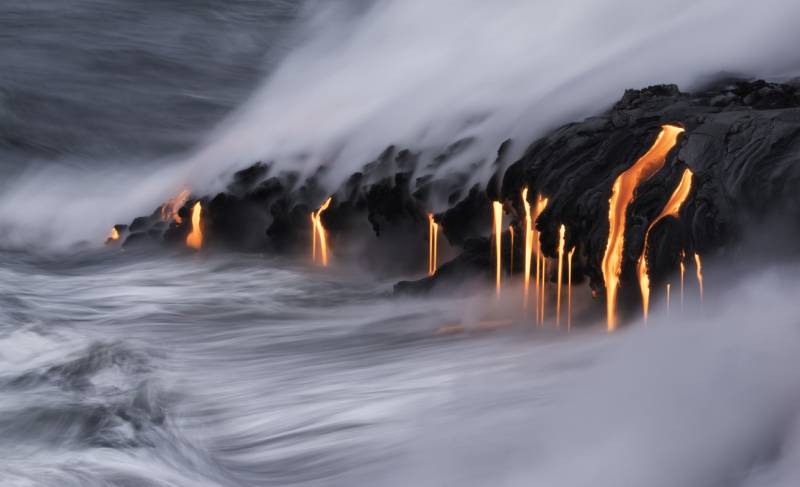 Nice article. Thank you. I am looking at property in town of Volcano. Is it safe and I ask for any resource to study climate, rainfall, taxes, utility expectations, etc. Kinda like a pre-move in history lesson. I am avoiding a relator at this time but someone or resources more impartial would be better. I have spend hours on internet studying “affordable places” if such a thing exists and just have not found the information I need.

Thank you in advance,
Ron

> Aloha Ron!
I have a packet of information that can answer your questions. It also has links to local websites so you con continue your online research. Just email me at ashtsuji@hawaiilife.com, and I’d be happy to send it to you.

I understand you’re not ready to talk to a Realtor yet. And full disclosure, I’m not a licensed Realtor, but I work for a team under Hawai`i Life. So no pressure! I can send you the info, and when you’re ready, let me know and I’ll put you in touch with a Realtor 🙂

I think we think about eruptions constantly here. You don’t mention all the house that burned in 2018 or the klossof all ocean recreation. Do you know that you have to collect rainwater for house hold use?

Spoken like true real estate agents right there! Can I sell you a home on a volcano?

Hawaii Volcanoes National Park Witnesses Second Eruption in 4 Months If you haven’t heard or seen by now, on September …

Today Hawaii is effectively closed to visitors as the State acts to contain the spread of the Covid-19 virus. Only …

The images of Hawaiʻi that exist in the collective imagination of the west often involve volcanoes. Travel industry posters meant …

With Hawaii County cracking down on short term vacation rentals on the Big Island, I am getting a lot of …