Today Hawaii is effectively closed to visitors as the State acts to contain the spread of the Covid-19 virus. Only two years ago, Hawaii Island faced a challenge of a different sort, as the east rift zone of Kilauea volcano began erupting in residential areas well outside of Hawaii Volcanoes National Park. Newspapers around the globe carried images of 300ʻ high fountains of lava and homes being consumed in minutes, the quick moving lava flow that reached the ocean and covered beloved sites in Kapoho on June 4th, and the earthquakes and explosive event that collapsed portions of Halemaʻumaʻu Crater and damaged buildings within the Park. The Park was closed to visitors and staff alike over safety concerns. 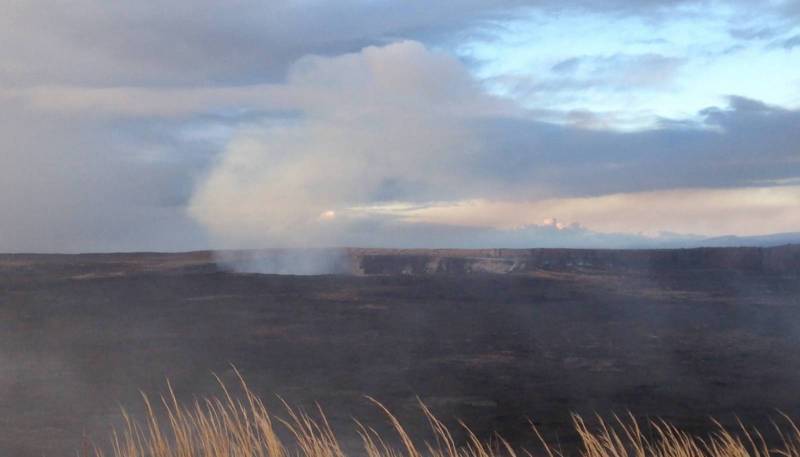 Within months the eruption was spent, and Hawaiʻi Island suddenly was free of vog, enjoying clear skies and views that had not been seen in three decades. Hawaii Volcanoes National Park is one of the Big Islandʻs top attractions, with nearly two million annual visitors in normal times. Although portions of the Park have re-opened, the Jaggar Museum remains closed and the National Parks Service is now soliciting public feedback on proposed designs for revamping HVNP to better serve visitors and research activities both.

The National Park Service has prepared four initial conceptual designs for a project to replace buildings and viewing areas damaged or destroyed during the 2018 eruption, as well as address other aspects of the existing infrastructure that presented problems in the past, like overcrowding and lack of adequate parking at the Visitor Center. While much of the planning seeks to better accommodate functions of the U.S. Geological Survey as well as the Park Service Staff,

In more normal times, community and user input would be sought in public meetings. Given the COVID-19 restrictions, public input is being sought on line. Finding and navigating to the designs on the official website is not easy, but here is the link to downloadable PDF files of the concepts, narrative, and a comment form.

Here is a map of the area near the Park entrance showing the buildings and infrastructure as they exist today:

Common to all the designs is the proposed reconfiguration at Uēkahuna Bluff, demolishing the damaged Jaggar Museum and an adjacent building, constructing an open-air shelter at the Museum site and a new overlook, with additional parking. This area of the park was often overwhelmed with tourists, especially at night, when during many years of the eruption, a red glow could be seen in the Crater.

While the Jaggar Museum was a historic site, it was awkward to have the exhibits there rather than at the Kilauea Visitors Center. And confusing, at least to me, to have the Visitors Center at a location where the crater was invisible. All four plans consolidate the functions previously split between the two locations.

From the publicʻs point of view, what differs between the four alternatives is what happens with the Kilauea Visitors Center, where most visitors, whether off-island tourists or Big Island residents, will stop to park if they plan to hike the rim, use restrooms, buy books and souvenirs after their visit, and hopefully engage in educational activities with Park rangers, scientists, artists, and cultural practitioners. 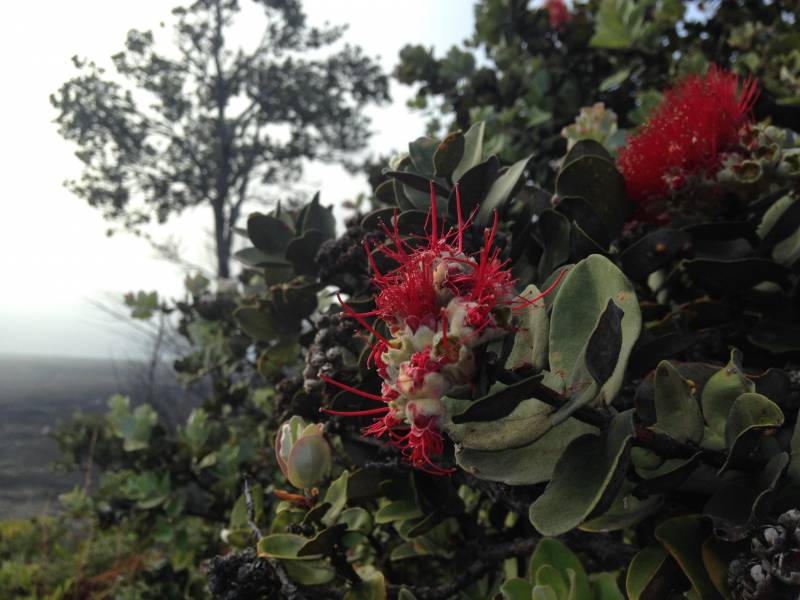 Lehua blossoms along the Crater Rim trail, one of the most accessible hikes in Hawaii Volcanoes National Park

CONCEPT #1: At first glance, this alternative is most intriguing to me as it moves the Visitors Center to the caldera side of Crater Rim Drive, next to Volcano House hotel. Visitors would not need to cross Crater Rim Drive in order to access the trail. The existing Kilauea Visitors Center would become an educational center, and the scientists of the USGS would have a new building next to it.

CONCEPT #2: This option would construct a new visitors center on the east side of the current one, which becomes an educational center. The USGS offices will be near an existing NPS maintenance area.

CONCEPT #3: This alternative constructs an addition to the Kilauea Visitors on the west side between the existing Center and the old Volcano House/Art Gallery, with functions divided between the two, connected buildings. The USGS field station is constructed at a different site.

CONCEPT #4: The Kilauea Visitor Center and USGS field station are relocated farther into the Park along Crater Rim Drive, to a historic ball field adjacent to Kilauea Military Camp. This would put the new Visitor Center complex approximately halfway between the existing Kilauea Visitors Center and the Jagger Museum location. The existing Center becomes an educational center.

If you have any preference between the plans, you can call the Park Service at (808) 460-6212. Or you can give your feedback on the form available on their website to mail in.

By the way, the future of tourism on the island will likely shift to encourage longer stays and experiences in locations like the HVNP area, rather than day trips from the resorts. There are a couple of licensed inns and B&Bs that would be great opportunities for a forward-looking investor or someone wanting to start a new chapter in their lives.

Thank you for providing this Beth.

The Big Island of Hawaii is one of the world’s greatest locations for avitourism. For those willing to trek across …

Hawai’i Island, also known as the Big Island, is one of the few places in the world where you can …