From Lava Flow to Luxury Resorts

Since the first Hawaiian occupants of Waikoloa scratched their petroglyphs on the freshly formed landscape, mankind has sought to leave its mark on this stretch of sun-baked coastline.

While the original creators of these early records had moved on by the arrival of the first Europeans, their images remain.

Hundreds of petroglyphs along with the fish ponds and ancient footpaths once used by the ruling Ali’i have been preserved by successive stewards of the Waikoloa area.

From Cook to Congress – The Almost Forgotten Coast

For nearly 100 years after Captain James Cook became the first European to lay eyes on the rugged Kohala coastline, it remained mostly unchanged. Its isolation, lack of modern conveniences and inhospitable setting atop hardened lava flows left it a barren backwater.

During the early years of the Hawaii visitor industry development favored established and accessible destinations like Waikiki and Kailua-Kona. The formal addition of Hawaii as America’s 50th state on August 21, 1959 was the spark that ultimately set in motion development along the Kohala Coast. 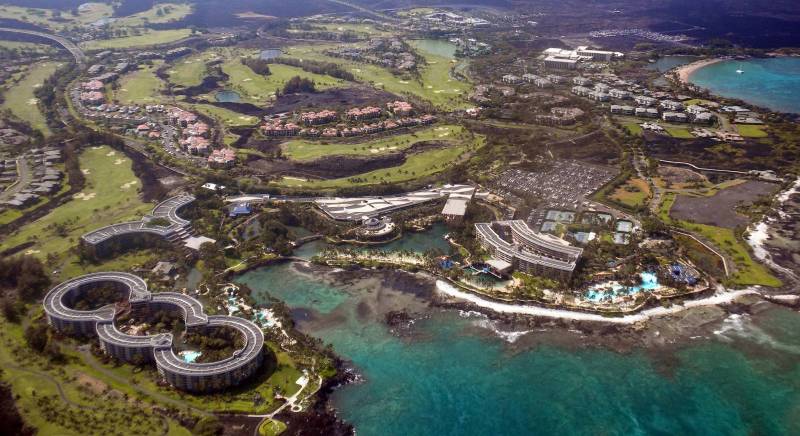 As the 1960s began, visitor arrivals to the newly minted 50th State began to skyrocket. Americans were enchanted by the stories of the sun-kissed beaches and exotic island natives that had returned home with American servicemen after the war. The dawning of the Jet Age of commercial aviation and the establishment of regularly scheduled service made this new and exotic corner of America accessible to throngs of eager travelers. With the surge in visitors to Hawaii, the Kohala Coast’s days as a remote and neglected stretch of marginal grazing land were numbered.

The opening of the dazzling Mauna Kea Resort by Laurance S. Rockefeller in 1965 ushered in the age of development along the Kohala Coast. Only 10 miles south of the Mauna Kea Resort, the golden sands of Anaeho’omalu Bay soon caught the eye of would-be developers. The area surrounding “A-Bay”, as it is commonly called, was known as Waikoloa. Inspired by the success of the Mauna Kea plans for Waikoloa Beach began to take shape.

Like the Mauna Kea Resort area, Waikoloa was part of the massive Parker Ranch. In an effort to diversify and bring the ranch back to profitability, fifth generation heir Richard Smart made the decision to sell off some low yield pasture land for tourism development. As Smart was quoted as saying it was land that “cows hated and tourists loved”.

Except for a few palm trees along the beach and a scattering of scrubby wiliwili bushes, the property surrounding A-Bay offered little in the way of vegetation.

Fresh water was nonexistent and nearly every element needed for the construction of a major resort would need to be shipped from thousands of miles away.

The logistics were daunting but 29 year old Boise Cascade executive Ronald Boedekker would not be deterred. Sensing an opportunity and smitten much like Rockefeller had been by area’s stunning beauty, Boedekker stepped in to purchase 25,000 acres and lease a further 6,000 acres surrounding A-Bay.

Ronald Boedekker – A Man for the Job

Along the path leading to Anaeho’omalu Bay from the Waikoloa Beach Marriott you can find a plaque honoring the late Ronald Boedekker. For more than 40 years, first as head of the real estate division of lumber giant Boise Cascade and later through his own development company, Ronald Boedekker played a key role in Waikoloa’s transformation.

According to the family, the challenges Boedekker faced in developing Waikoloa were aptly summed up by his wife Kitty during an early tour of the area. When Boedekker shared his vision of Waikoloa covered with “rainless rain forests”, golf courses and luxury hotels, her immediate reaction was “are you insane?”

She had a point. The road from rocky scrub-land to lush playground would prove to be long and arduous. To accomplish the monumental task Ronald Boedekker would rely on a unique gift.

Unassuming and typically shy of the limelight his ability to share his vision in a way that made others believe in his bold plans would be the catalyst that brought the Waikoloa Beach Resort to life. Thanks to Boedekker’s tireless advocacy for the project and conviction in his dreams many brilliant and influential people came to share in the creation of the resort that you find today. Among them was the flamboyant Chris Hemmeter who headed up the development of what came to be known as the Hilton Waikoloa Village.

Boedekker put a high priority on family and always envisioned Waikoloa as a place for families to enjoy and be together. He also had a deep affection for the Hawaiian culture and the family values which he shared. From a very early point in the development of Waikoloa the preservation of Hawaiian history and the inclusion of Hawaiian dance, food and crafts in resort activities was a priority.

All around the Waikoloa resort you can find reminders of the ancient Hawaiian people that lived here. The fish ponds that front the bay were built by hand using thousands of laborers and carefully tended on behalf of the ruling ali’i. The nearby preserved petroglyph fields tell the stories of those laborers and the many travelers, hunters and warriors that passed this way. Whether it was used for fish pens, shelters, or as a canvas for their art, hardened lava was a primary raw material for the ancient Hawaiians.

For golf course designer Robert Trent Jones and his apprentice son, the endless fields of lava along the Kohala Coast could have been a major hurdle had they not seen the wisdom of the ancient Hawaiians. Using the technique pioneered by his father at the Mauna Kea Beach hotel in the early 1960s Robert Trent Jones Jr. oversaw the construction of the Waikoloa Beach Golf Course which opened in 1981.

What RTJ II had learned was that crushed lava rock makes an excellent base for growing hardy Bermuda turf grass. Not only was lava rock abundant and readily available but when finely crushed it required only minimal amounts of topsoil to be ready for planting.

In 1987, during construction of what is now the Hilton Waikoloa Village, Madame Pele offered an unexpected gift.

As the resort neared completion the path of the lava flowing down the opposite side of the island shifted and threatened a large stand of coconut palms near Kalapana’s famed black sand beach.

While the lava was closing in hundreds of the doomed palm trees they were airlifted by helicopter and transplanted in Waikoloa. While two small fishing villages and the nearby black sand beach were sealed under a thick layer of lava, many of the rescued palm trees continue to thrive on the grounds of the Hilton Waikoloa Village today.

They are a fitting final touch for the spectacular resort thanks to Madame Pele.

Foundations for the Future – Pioneering Visions and Lasting Values

Since the idea of a major resort on the shores of Anaeho’omalu Bay was first proposed in 1969, the vision for Waikoloa has been evolving.

While each new phase of Waikoloa has adapted to changing trends and attitudes the core values on which it was founded have been preserved. Since the beginning, the Waikoloa Beach Resort has sought to maintain respect for the land, the environment and the Hawaiian culture that it shares.

Today there are several condominiums and a new home development.

You can read about the various developments at:

If you are interested in buying in this area, let me know!

What a great article! Thank you for the history lesson.

I recently wrote about the Hawi Plantation Manager’s House that is for sale. This week a second listing of a …

Aloha Dear Friends, I just toured this stunning Ranch for sale in Waikiki Ranch on Big Island Hawaii going for …