The Kohala Coast was the birthplace of King Kamehameha I, credited as the first to unite the Hawaiian Islands under one ruler. There are many historic relics of his rise to power here, including the Puʻukoholā Heiau.

A new kind of royalty arrived in the 1960s when the business tycoon and philanthropist Laurance S. Rockefeller created, what was at the time, the most expensive hotel ever built. The Mauna Kea’s environmentally sensitive design made it a forerunner of the movement that came to be known as eco-tourism. 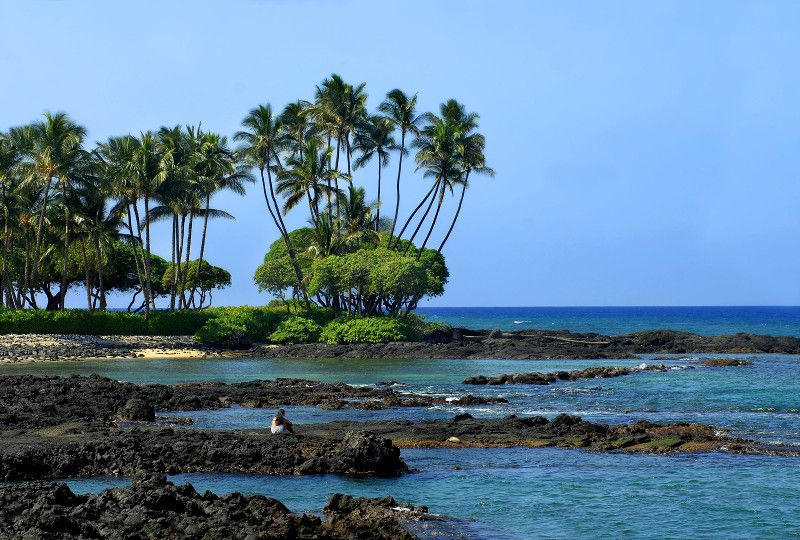 Since 1981 the Kohala Coast has also served as a dramatic backdrop for epic athletic battles in the World Ironman Championship. The 112-mile cycling leg crosses the Kaupulehu lava flow, better known to competitors as the blast furnace. This annual race pits the most extreme endurance athletes on the planet against the clock, each other and the sometimes merciless heat and wind that rip across the barren lava fields.

Most visitors and residents prefer to enjoy the many less demanding activities that the Kohala Coast has to offer and bask in the nearly 365 days a year of sunny warm weather. Life on the Kohala Coast offers every imaginable outdoor activity and a surprising range of dining and entertainment opportunities. From beach barbecues to five-star dining and championship golf to great snorkel spots, Kohala has it all.

It’s often the first question people ask after stepping off the plane into the warm flower lei scented air at the Kona International Airport. Where’s the beach?

The rocky wave swept Kohala Coast hides a number of tropical gems in the form of protected bays and inlets with sandy palm-fringed beaches. Each of the major resorts along the coast commands its own stretch of white sand beach and by State of Hawaii law, all beaches are public access. Use of the resort’s facilities is not included, however. If you would rather not mingle with the wristband wearing resort guests, there are several excellent spots to live like a local.

Although you share the beach with the Mauna Kea resort, the south end of the beach is usually deserted, in a large part due to the resort restricting public parking to only 30 cars. For those that get here early to grab a spot, there are showers and restrooms, acres of white sand and crystal blue water.

Just around the rocky point and past the Hapuna Prince Hotel is the Hapuna Beach State Recreation Area. It is a large park fronting a wide, sandy beach. It offers great boogie boarding in small surf and excellent snorkeling and swimming on calm days. It has ample paved parking, a large grassy landscaped area with barbecue areas and a food concession.

There are six state-owned and very rustic A-frame shelters in the park that can be rented for $30 a night by residents and $50 a night by non-residents. Not bad when you consider the hotel guests down the beach are paying $300 a night. Two sleeping platforms in each shelter provide room for 4 people. Guests provide all their own bedding and share a separate kitchen and bathroom facility.

Located beside the Mauna Lani Bay Resort, Holoholokai has many fascinating petroglyph carvings that you can check out. There is only a small amount of rock-strewn sand, but there are tide pools for exploring, palm trees for lounging under and plenty of free public parking. You can also easily walk to the beaches fronting the Fairmont Orchid and Mauna Lani from here. At sunset and on full moon nights the local resort homeowners gather with their lawn chairs for an impromptu get together.

Golf has become synonymous with the Kohala Coast. Whether it’s the annual Senior PGA tour stop or the former Senior Skins games that brought together golf legends like Lee Trevino, Jack Nicklaus, and Arnold Palmer, Kohala has been forever branded as a golfer’s dream come true. 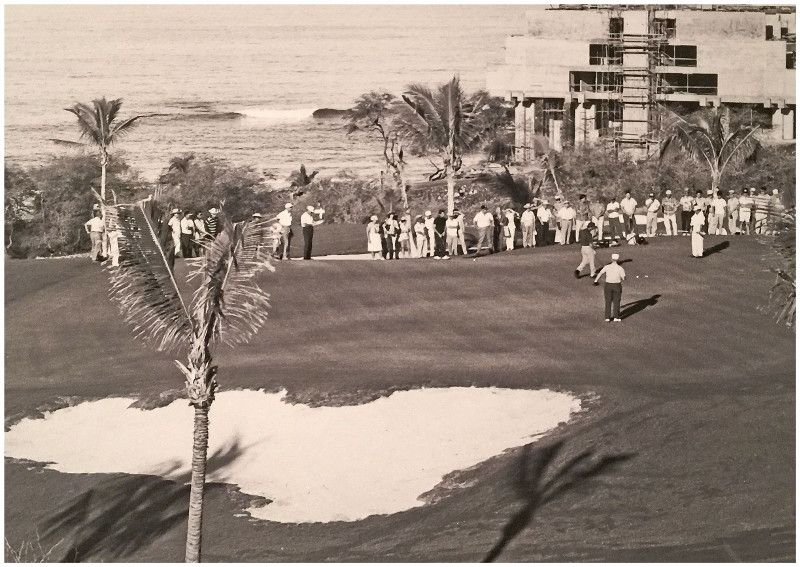 Among many firsts, the Mauna Kea Resort’s golf course pioneered the signature lava field design. By crushing lava rock and hauling in tons of topsoil, course designer Robert Trent Jones Sr. was able to carve a distinctive and challenging course out of the solid rock. The prevailing trade winds, sloped greens, and unforgiving scrub and lava that line the fairway demand skill and accuracy.

Golfers may find the course even more challenging because of the spectacular scenery at every turn. The par 3 third hole is perhaps the most photographed in Hawaii. Reaching the green off the tee requires a nearly 200-yard carry over crashing Pacific surf.

To compliment Mauna Kea’s popularity as a golf destination, the Hapuna Golf Course was added to the resort in 1992. The course, located just across the highway from the Mauna Kea, was designed by Arnold Palmer and Jack Seay. Numerous discount packages are available for guests at the Mauna Kea and Hapuna Prince to play multiple rounds on both courses.

Robert Trent Jones Jr. Continued to leave his mark on the Kohala Coast with a pair of 18 hole courses that opened at the Waikoloa Resort in 1981. The King’s Course and the Beach Course both employ the sloping greens, devious bunkers and verdant green fairways cut from barren lava flows.

The Mauna Lani Bay North and South Course pay tribute to Hawaii golf history. Two courses are named for Francis H. I’i Brown, a descendant of Hawaiian royalty and acclaimed golfer and sportsman during the 1920s and 30s. Brown began acquiring property around what was to become the Mauna Lani Bay Resort in the 1930s. He sold the property to Japanese developers in 1972.

The first of the two courses that bear his name was opened in 1981. 18 more holes were added in 1991 and redivided into the north and south courses that you see today. Borrowing a page from the Mauna Kea course, the Mauna Lani courses snake through imposing black lava fields and across pounding Pacific surf. Ancient petroglyphs and protected archaeological sites dot the course and bunkers protect the special salt tolerant and drought resistant Salam grass greens.

Want to Own Property Here?

If the Kohala Coast sounds like your kind of paradise, give me a call and I can show you some of the many Real Estate options available along our beautiful South Kohala Coast.

Thanks for sharing the golf knowledge. I thing lie local knowledge eh :)?

As of July 8th, any U.S. visitors to Hawaii who possess one of three federally recognized vaccination documents from the …

New For Sale: Vacation Rental Home Steps From the Sand at Anini Beach

With countless coffee farms along the Kona Coast, there are three Kona coffee shops you don’t want to miss: HiCo Hawaiian …