The crew offloads their gear and stumbles over to Mel’s tent, following the sound of live music and raucous laughter—the kind inspired by good food and better company. The music gets a boost from a member of Uncle’s Favorite, Tommy Tokioka—a former member of the Kauai Boys Band, led by Hawaiian surfing legend Titus Kinimaka. Ironically, several locals under Mel’s tent refer to the arriving crew as the “Kauai boys,” all of whom have roots on that island.

The team stays under Uncle Mel’s tent late into the evening, a necessary tactic for the crew of outsiders trying to earn respect from the local judges. But eventually the music dies down, the laughter grows faint, and the crew trickles off to bed, crawling into their sleeping bags strewn about the sandy beach. They fall asleep quickly, dozing off to the growing tremble of waves crashing in the background, a promising sign for tomorrow’s competition. 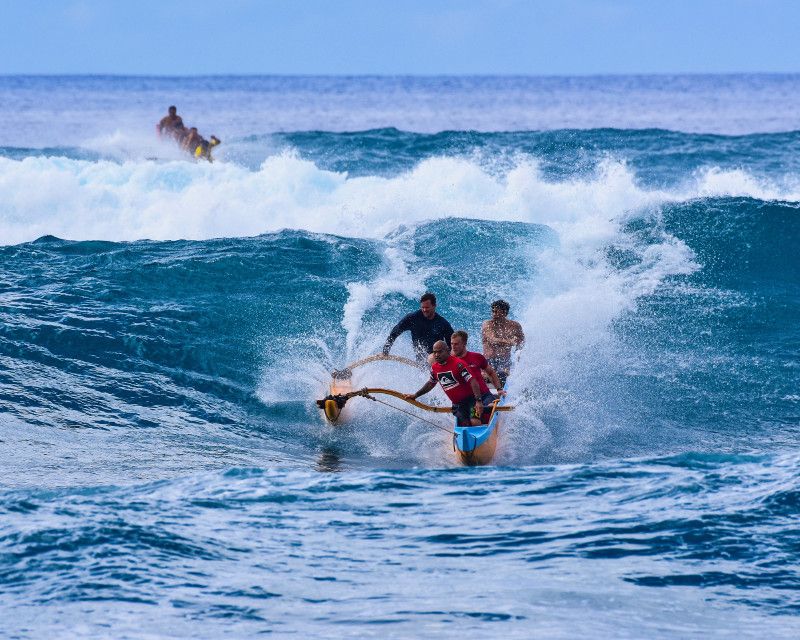 It is now late Sunday afternoon, as Uncle’s Favorite paddles their borrowed four-man surfing canoe out to the line-up to await the final heat of Bradah Mel’s Waterman Championship. It’s been a long day for the Kauai-based watermen. After making it to the semi-finals in the SUPsquatch event, the crew has been paddling all day with little time to rest between heats.

The swell is pumping at Makaha, and the waves are consistently four feet on the Hawaiian scale (roughly 8-10 foot faces). There is little room for error under these conditions, but so far, it has been an errorless day for Uncle’s Favorite. Led by captain and steersman Kauila “Scooter” Sagum, the team scored a rare perfect 30-point wave in the canoe surfing competition’s opening round. 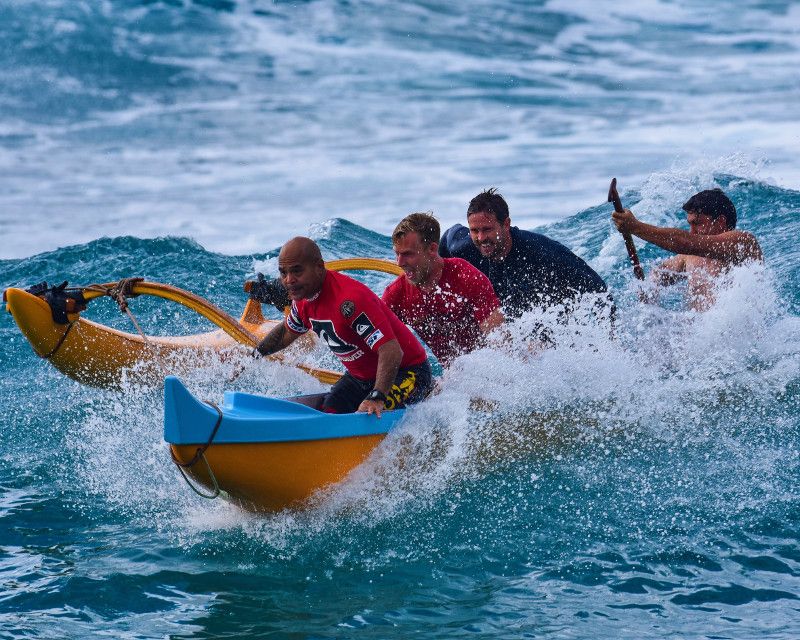 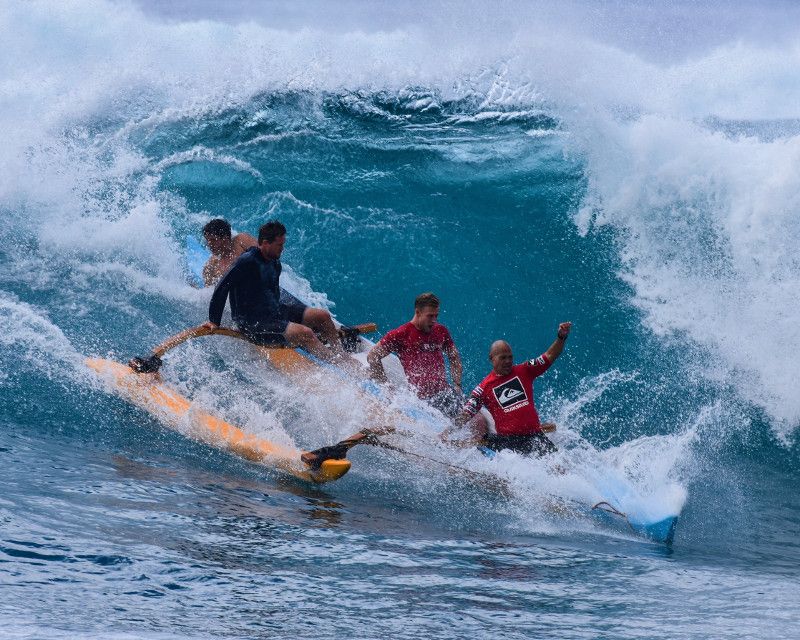 As the crowd fills in at Makaha Beach, and the photographers ready their long-lenses, members of Uncle’s Favorite bow their heads in prayer. They call on the wave gods to bring them good fortune in the final heat of the day’s main event and paddle off to await the sounding horn. A first place victory would certainly make the late-night standby flight out of Honolulu more enjoyable. “Let’s bring one home to Kauai,” one member exclaims. The rest of the team nod their heads in agreement.

The crew grows restless as they wait for their first wave of the canoe surfing final to arrive. They finally spot their wave and take advantage, riding it flawlessly all the way to the beach, spurned on by the roaring crowd in front of them. One crewmember looks at his watch as the team hurriedly paddles the long back to the take-off zone. “Three minutes,” he yells, “enough time for one more wave!” 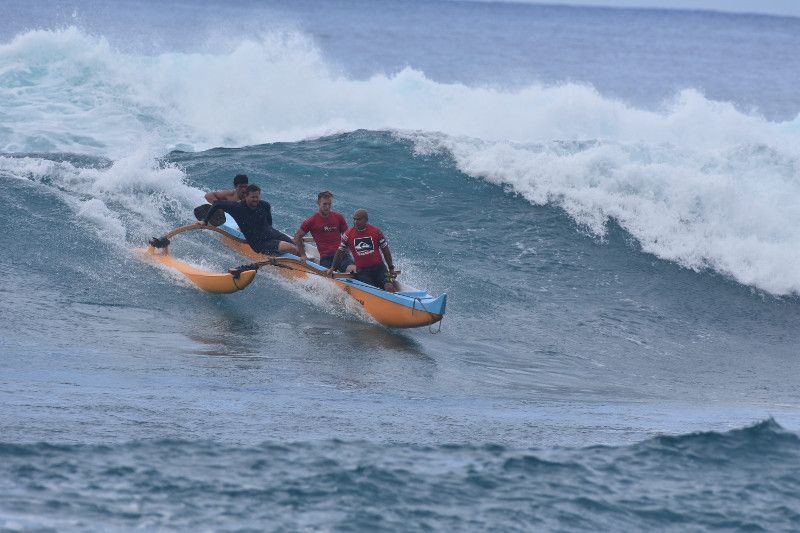 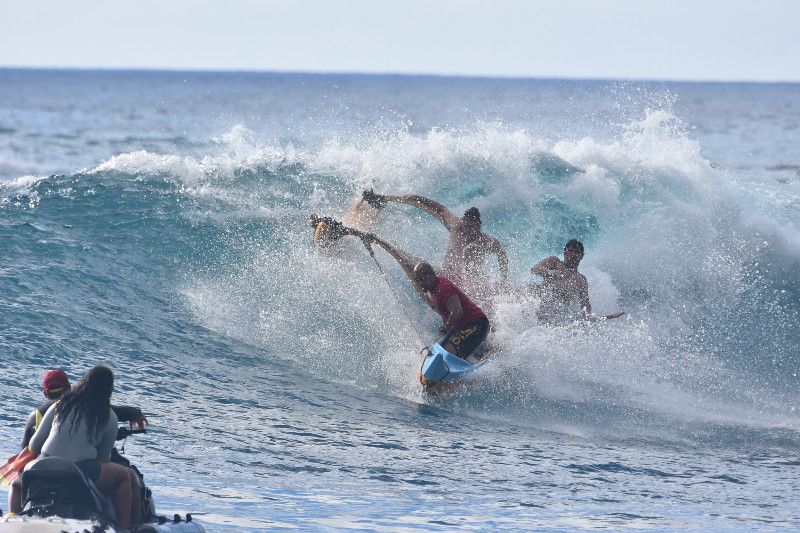 By the time Uncle’s Favorite makes it back out to the lineup, the waves are firing, and the clock is ticking. They suddenly spot a massive set wave bearing down on them. The wave’s 12-foot face towers over their canoe as the team digs deep, hoping to make it over (or through) in time to catch the following wave. The team punches through the breaking face as they get their first look at the next wave—bigger than the last, biggest of the day. Uncle’s Favorite has no choice but to punch through this monster too. They are exhausted from a day of countless paddle strokes and wave rides, but resting is not an option.

The half-sunken canoe rises up the face of the wave. Almost completely vertical, it begins to pitch. “Stay in the canoe,” are the captain’s final orders. Butts firmly glued to their respective seats, the crew topples over backwards and is tossed from the vessel. It’s a yard sale—parts flying everywhere, paddles strewn about in the wake of the passing wave. Resurfacing amongst the churning whitewater, members of Uncle’s Favorite can barely make out the sound of a foghorn blaring from the distant shore. The event is over. 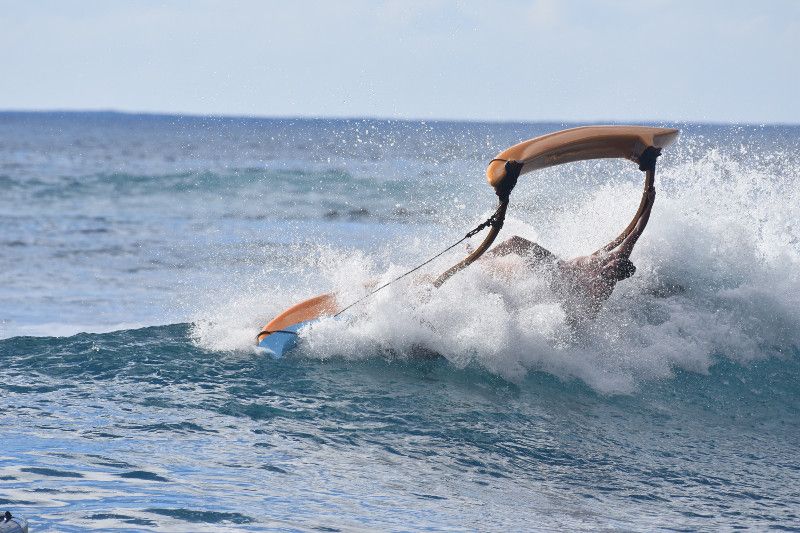 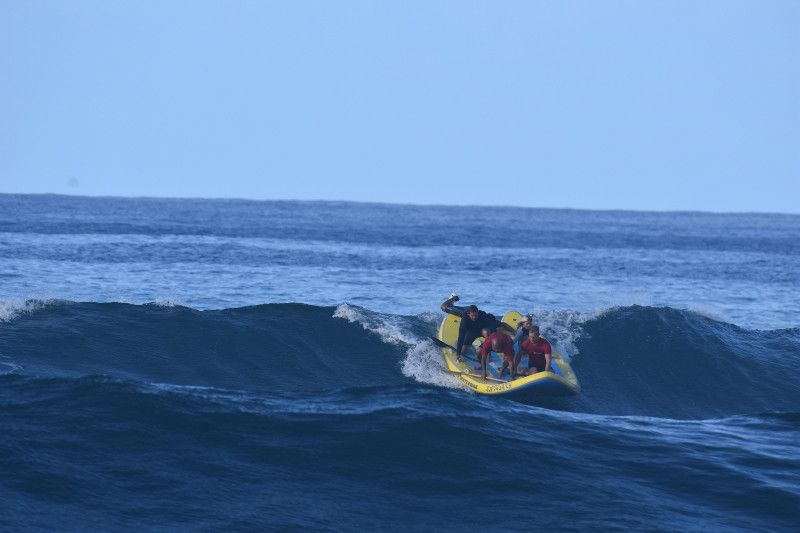 The world’s best lifeguards rush to the scene on jet skis to rescue the scattered crew as they reach out their hands and gladly accept a ride to safety. Hanging off the back of a jet ski, Kauila Sagum and Spencer Dunlap hold on tight to the rescue sled. They laugh hysterically, punch-drunk from a mixture of adrenaline and exhaustion, knowing that they missed the wave of the day by mere seconds. “Worth it?” Scooter asks Spencer, who flew out from California for the event. “Absolutely,” Spencer answers.

Uncle’s Favorite, the Kauai-based watermen who barely missed a first place victory in “all-men-overboard” fashion, will have to make do with second place at this year’s championship. Not a bad way for the visiting team to go out, especially when losing to first place steersman Brian Keaulana—a legendary North Shore lifeguard and waterman. “We’ll get ‘em next year,” is the team consensus, as they walk up the beach to shower off and prepare for the journey home. 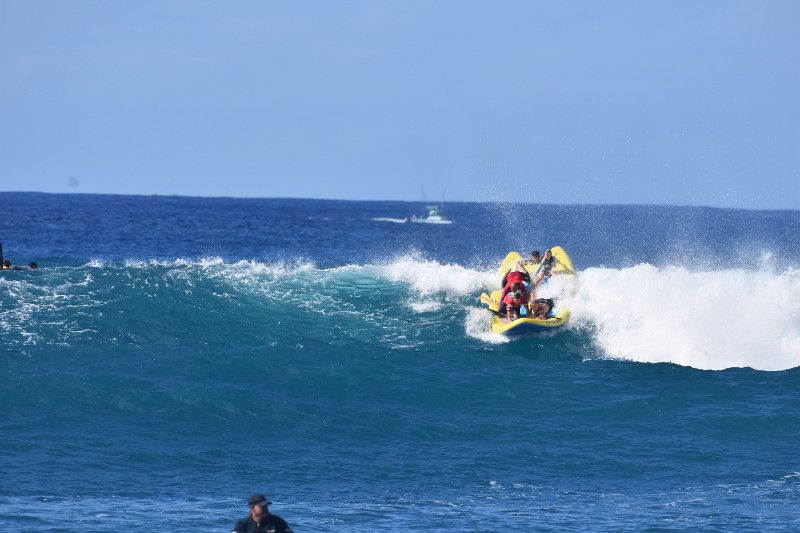 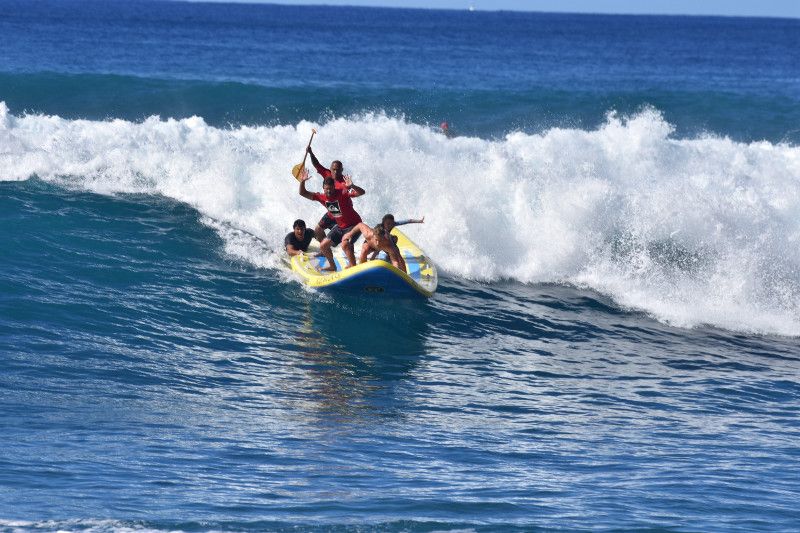