Seventh Heaven on Oahu is an episode from Season 10 of HGTV’s popular Hawaii Life program that follows the Bauers, a Colorado family, on their search for the perfect five-bedroom Oahu home. Amy and Dan Bauer were planning a move to Hawaii when they were connected with HGTV’s Hawaii Life casting team. At the time, they were working with a Hawaii Life agent and looking for the perfect island setting for their five daughters. 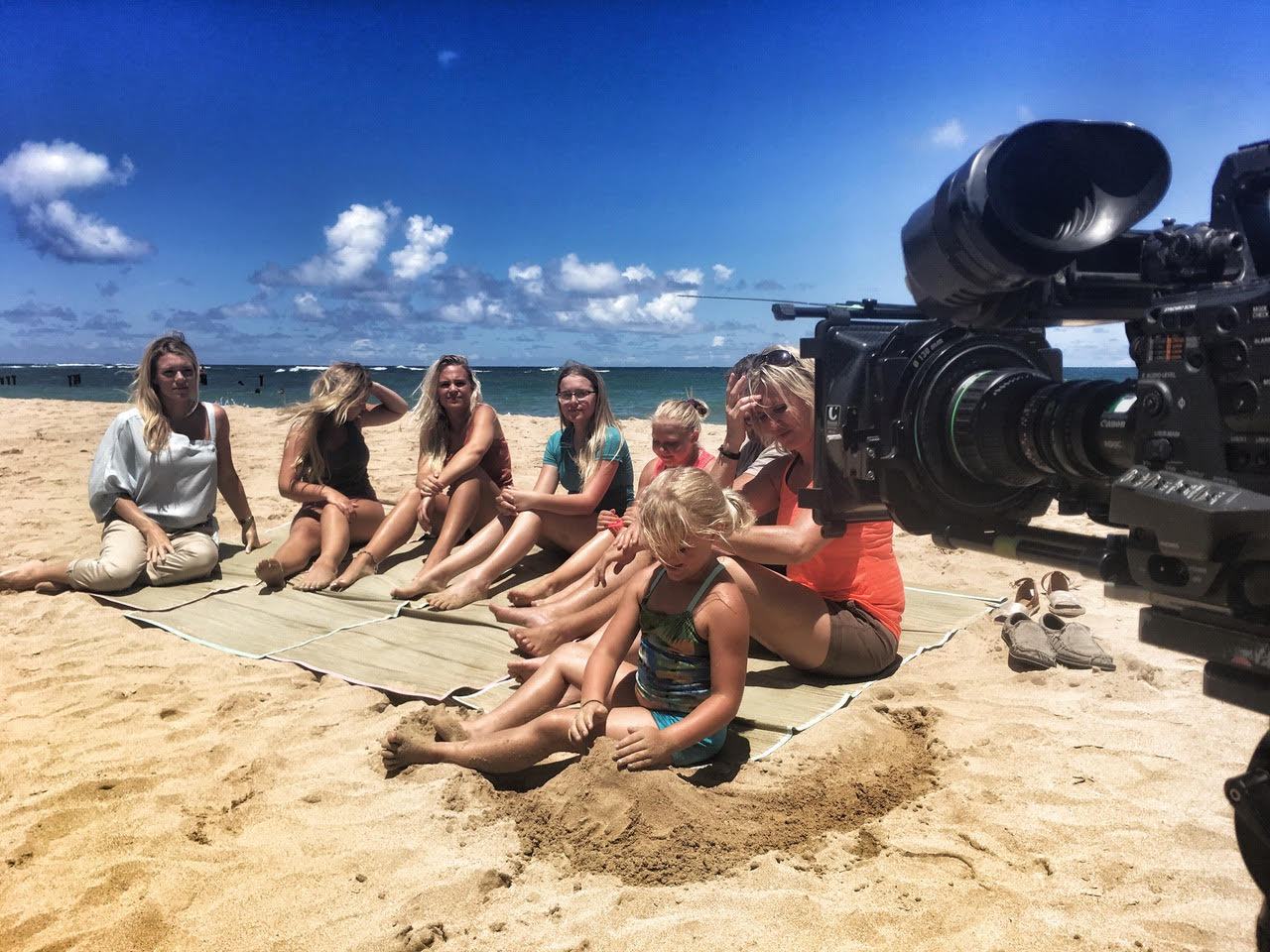 “We had watched Hawaii Life for years and we loved it,” Amy Bauer told us recently. “We fell in love with all the different islands and we got a glimpse of what each area was like by watching the show. We reached out to Hawaii Life Real Estate Brokers and our agent, Ashley Bailey, suggested we appear on the show. We could film our segment on our next visit. We immediately said, “Oh heck yeah! We’d love to be on our favorite TV show!” Amy told us.

A Need For Home Office Space

The Bauers’ episode follows them on their quest. Both Amy and Dan have portable careers, so initially they were looking for a home close to Brigham Young University on Oahu’s North Shore, where their eldest daughter was considering going to college. Dan is a financial planner and Amy is a professional portrait photographer, so the family needed a home office space, in addition to five bedrooms. Their plan was to continue to homeschool their other four daughters in their new Hawaii hale.

Ashley showed the Bauers three homes in front of the show’s rolling cameras, over the course of three days of shooting. Competing for their attention were “The Laie Retreat”, close to BYU on Oahu’s North Shore, and “The Oceanview Hale”. They thought they’d found the perfect fit in a home up on the ridge in Kaneohe – it came complete with incredible views, a wrap-around lanai, and a huge media room, and it had the needed office space for the Bauers.  The “Bayview House” checked all the boxes for the Bauers, and the icing on the cake was that the home was newly built. 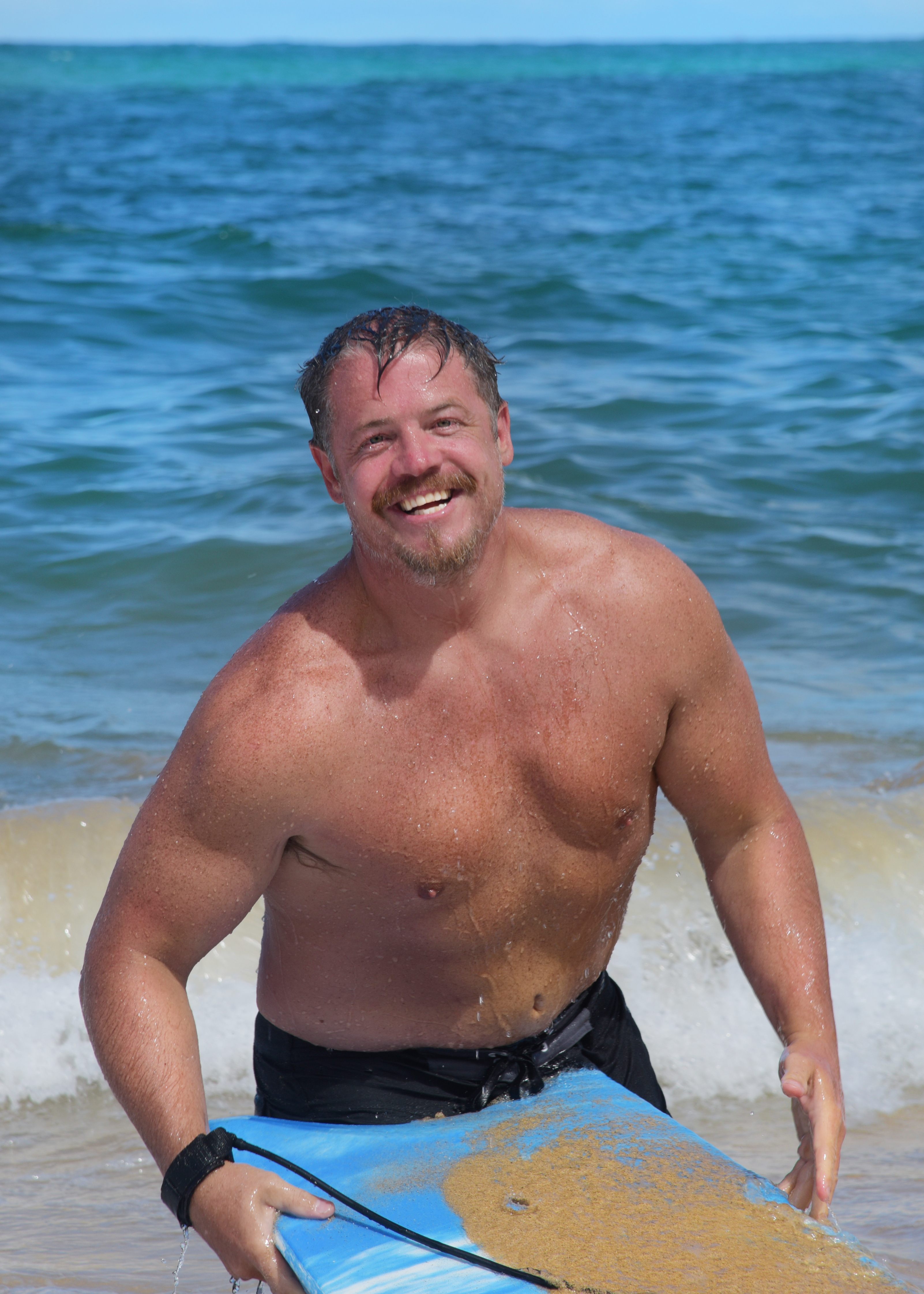 The Bauers enjoyed their HGTV filming experience. The days were long but fun – lasting from 7 to 5 each day. The episode was filmed in multiple locations across Oahu. We asked Amy about her family’s experience on the show. “The actual filming was nothing like what I thought it would be. I thought we’d look at homes, see how awesome they were and move on. We didn’t realize they’d need shots from different angles and multiple takes. But it super cool and fun!”  Their family’s favorite part was filming a ziplining adventure at CLIMBWORKS at Keana Farms, on the island’s North Shore. “We’d never been ziplining before. It was great to be in Hawaii and to experience it as a family. It was a really big deal for our six-year-old.” 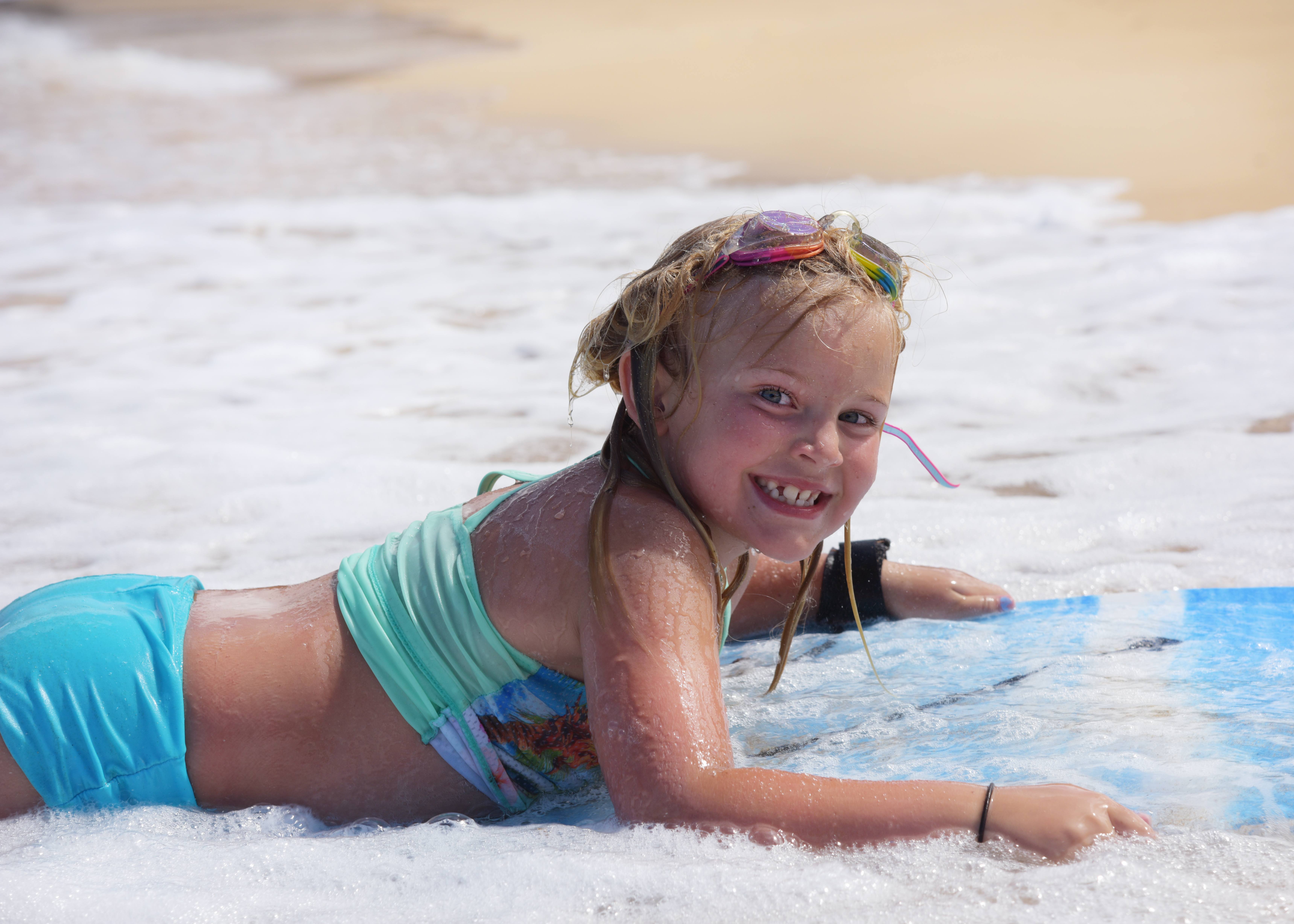 Another favorite aspect was a day at the beach captured by HGTV’s film crew, who followed the Bauers and drew quite a crowd. “We had our own private lifeguard for the kids that day, and the film crew was really nice. There were a number of local guys who gave us tips on where to eat and what to see. They were excellent tour guides!” said Amy Bauer.

The family stayed in a home on the North Shore in Hauula and shared some “good family bonding time,” according to Amy, who shared the air date for the program with friends both far and wide, including with her relatives in Norway. “I’m not sure how, but they watched it from Norway. All of the girls and their friends loved seeing the show,” Amy said. 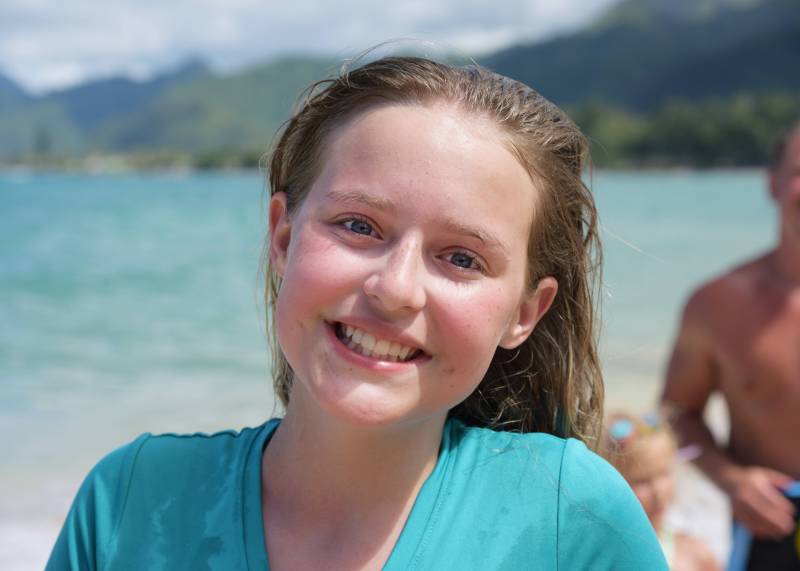 Ultimately, the Bauers’ offer and counter-offer on the beautiful 5-bedroom Kaneohe home were rejected. But Amy is still hopeful and planning more frequent trips to Oahu to see her daughter, who has since been accepted into the digital media program at Hawaii Pacific University, in downtown Honolulu.

A Facts Based Approach to Clients 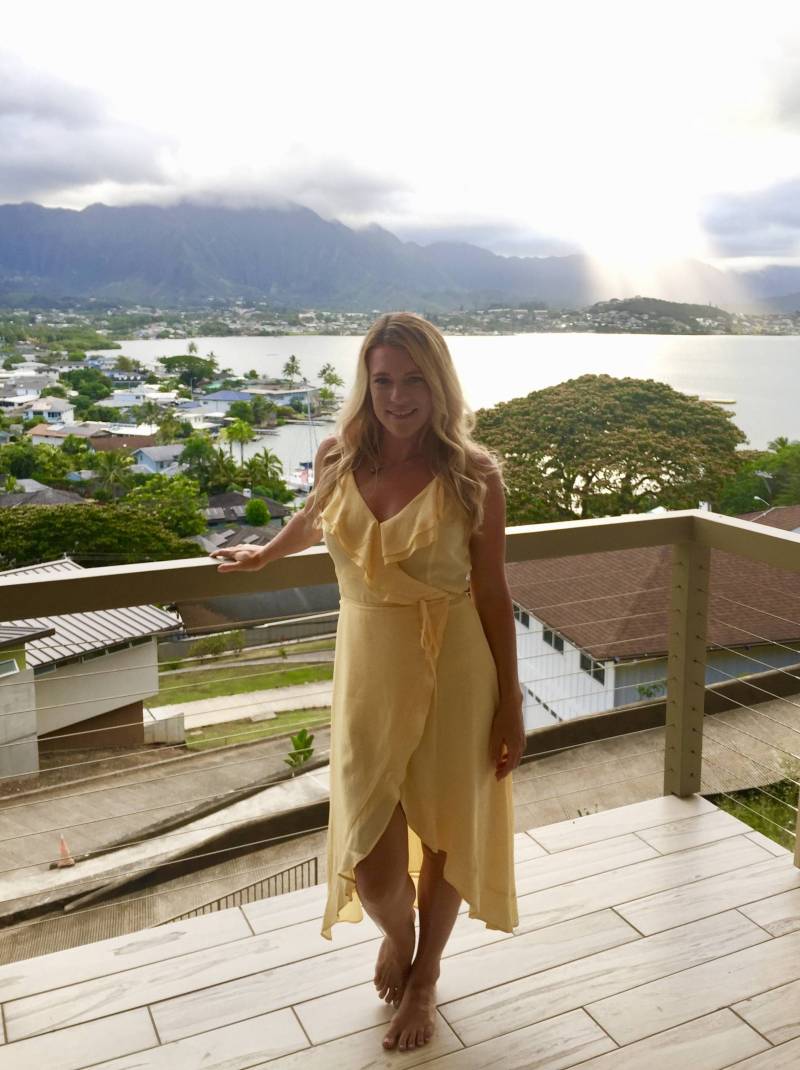 Hawaii Life agent Ashley Bailey on the lanai in Kaneohe.

“Buying a home can be stressful so I try to provide my clients with as many helpful facts and figures as possible in order to ease their minds about their decision to buy a home,” said the Bauers’ Hawaii Life agent, Ashley Bailey.  She received numerous calls from Los Angeles area residents following the episode. They were amazed at how affordable the Oahu properties depicted on the show appeared to be, relative to California. “In L.A., a similar home with those kinds of ocean views would be priced from $10 million to $15 million, they told me.” The exposure from the episode gained her a few new long-term clients looking to move to Hawaii, and solidified her reputation in the Hawaii market as a real estate professional with great negotiating skills. 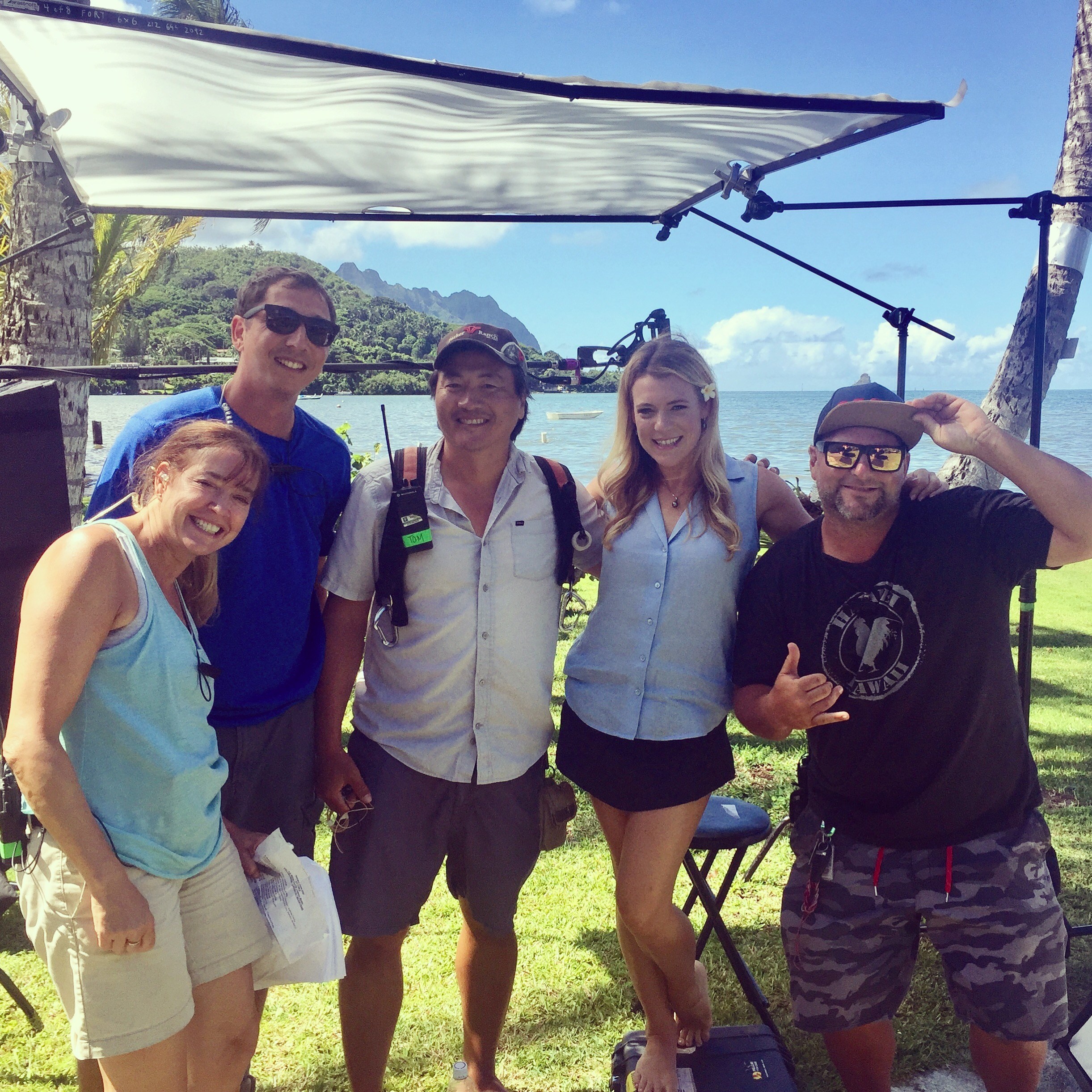 Hawaii Life agent Ashley Bailey with the crew of the show.

An avid sailor and surfer, Ashley moved to Oahu seven years ago from Middleborough, Massachusetts. She’s actively involved in the Hawaii Yacht Club and in racing and has built a network for clients through a shared passion for being on the water. Her approach? To alleviate client’s stress about their biggest purchase by providing solid facts and useful info. She reminds her clients of the 4% average appreciation rate that Hawaii homes have seen pretty consistently, year-on-year, for the past 30 years. “I’m pretty down to earth and easy to work with. I treat every client like they’re a VIP and I like to go the extra mile. 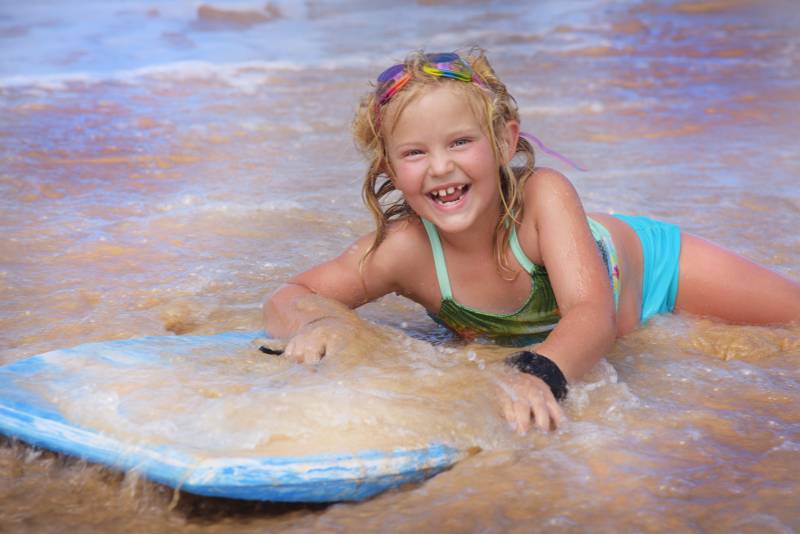 If you’re interested in appearing on HGTV’s Hawaii Life, the show’s casting director is currently searching for Hawaii homebuyers and sellers for the upcoming 11th and 12th seasons. We are looking for families, individuals or couples from anywhere in the world who are buying a home on one of the Hawaiian Islands. If you and your family are ready to give up the hectic life of the mainland for the lush beaches, beautiful weather and aloha spirit of Hawaii, then we want to hear from you! If you’re already kama‘aina, we want to hear from you, too!

Check out our recent blog post Casting Call For HGTV’s Hawaii Life! for more details about eligibility. If you’re interested in learning about other show participants and their experience, you can read about Jill Caisey’s family and the Hart Ohana in our recent blog posts. If you meet the eligibility requirements and are interested in appearing on the next seasons of Hawaii Life, you can send an email to hicasting2@gmail.com and include your contact details and information about what you and your family love about Hawaii. 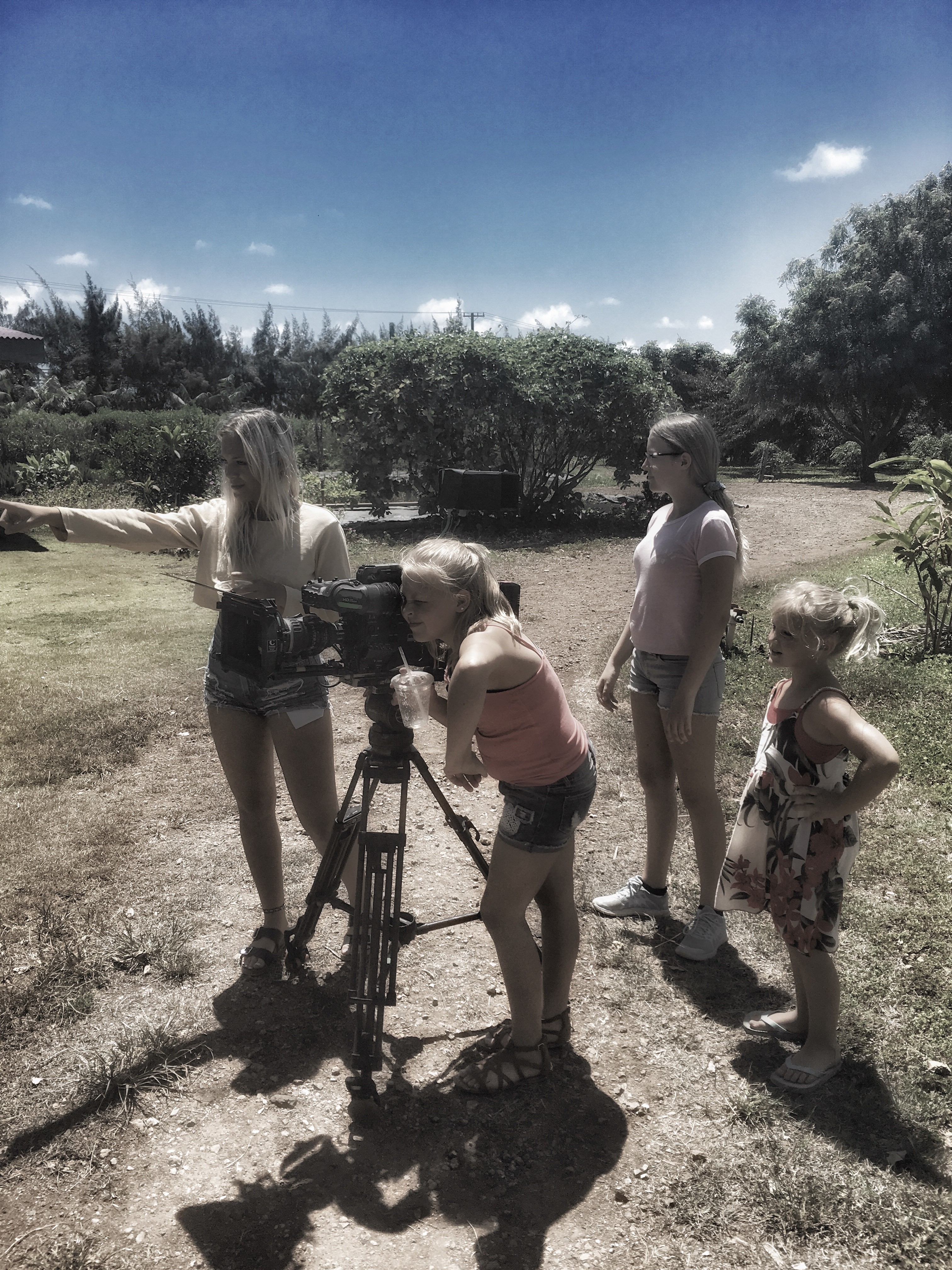 The Bauer family getting a moment behind the camera.

To cast your vote, visit: HGTV.com/HouseHunt Hokulia Phase 1, Residence 116 –A listing represented by Carrie Nicholson, R(B)  of the Hawai’i Life …

Things to Consider Before Moving to Hawaii

Since moving to Hawai’i, I’ve met numerous people who have tried living here, but have ended up moving away for …

Must-Haves When Moving to Oahu Hawaii