Honolulu has so much to offer visitors and residents alike. A surprising array of beautiful and unique architectural styles and a lively arts and cultural scene are some of the high points of this beautiful, historic city. Many visitors to the island come for the beaches and surfing, only to be surprised by all the other appealing attractions. We residents have been keeping these quiet, perhaps, so we can have them all to ourselves. After all, there’s nothing like a live performance to create memories and an experience that will last a lifetime. Here are a few of our city’s top live performance venues you won’t want to miss, whether you’re a visitor or a long-time resident.

One of downtown Honolulu’s architectural jewels, the splendid Hawai‘i Theatre Center is known for its iconic marquee (pictured above) that lights up the heart of bustling Chinatown on Bethel Street. The theatre is surrounded by excellent restaurants, nightlife, and is conveniently located just a few blocks from Honolulu’s business district.

Built in 1922, the Hawai‘i Theatre Center is listed on both the State and National Registers of Historic Places. While the rainbow state is known for it’s beaches and surfing, Honolulu is home to some incredible architecture, and this is one fine example. Now a non-profit organization, the theatre was restored to its former glory in 1992. The theatre’s auditorium is host to a wide range of performances for both adults and children, including a matinee theatre program especially designed in length and content for young audiences. The space itself is intimate, at just 1,350 seats, but it has won national awards, including one from the League of Historic American Theatres.

Apart from its curated selection of unique performances, the building itself is a study in Beaux Arts architectural design. Docent tours are offered on Tuesdays so if you happen to catch one, you can learn about the history, art, architecture and restoration of this historic Honolulu landmark. If historic buildings are of interest to you, you can find so many in this area of Honolulu, as well as in the Lower Punchbowl area, near to Honolulu Hale (City Hall). We recommend the Historic Hawai‘i Foundation website for more resources on landmark buildings across the state. 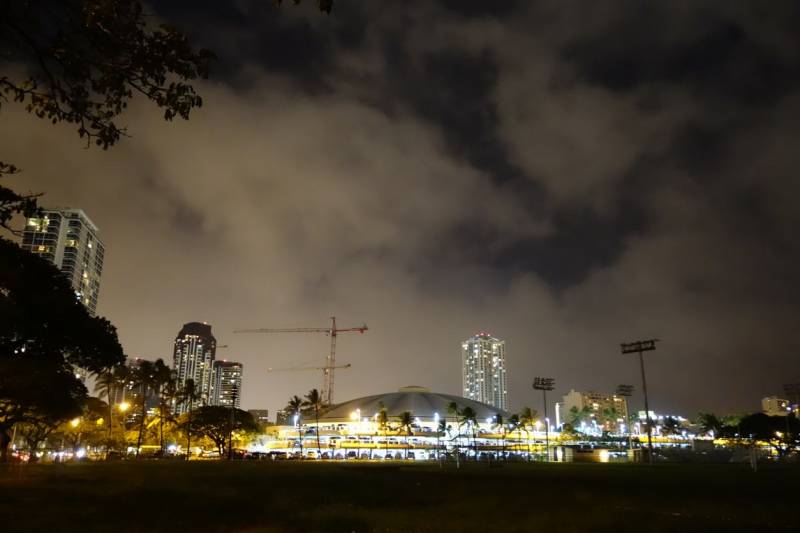 The iconic concert hall at the Neal S. Blaisdell Center, lit up at night

Boasting an arena for sporting events, a concert hall, and an exhibition hall, the Blaisdell Center, as it is more commonly known, is the City and County of Honolulu’s official and premier events venue. Named for a long-serving mayor of Honolulu, the venue offers flexible options for incoming performers, entertainers, comedians, speakers, conventions, and consumer shows.

Recent concerts in the arena have included Sir Elton John, James Taylor, Lady Antebellum, Allan Jackson, Journey, Santana, Miranda Lambert, Bruno Mars, and Diana Ross. The Concert Hall is Hawai‘i’s premier performing arts theater for the Honolulu Symphony and the Hawai‘i Opera Theatre. Broadway musicals such as Wicked, the Lion King, Phantom of the Opera, Les Misérables, Rent, Miss Saigon, and Chicago have all graced the stage in recent years. The expansive exhibition hall hosts local favorites like the annual Bridal Fair, the Made in Hawai‘i Festival, and Pacific Ink, an annual tattoo and art festival. 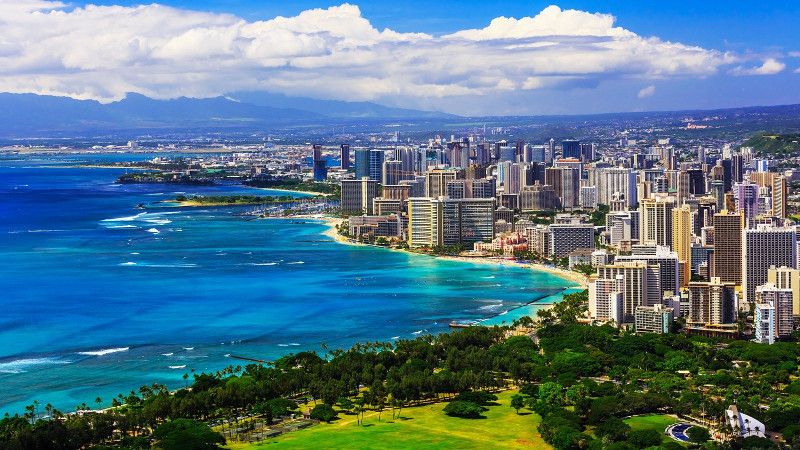 The Honolulu skyline as seen from the top of Diamond Head, with the Waikiki Shell in the foreground (bottom right)

The well loved Waikiki Shell is located next to the Honolulu Zoo, at the western edge of Kapi‘olani Park. It is a magical outdoor venue perfect for twilight and evening performances. With views of the nearby Diamond Head crater rim, swaying palms, and a sweeping view of the night sky, it’s the perfectly casual outdoor venue. But the stars aren’t just in the sky – they’re onstage, too.  The acoustically sophisticated stage is shaped like an open seashell, and show-goers can choose between chair seating or lawn seating at the back.

The Shell, as it’s more commonly known locally, plays host to all kinds of musical and comedic performances. Most recently, O‘ahu’s own Jack Johnson played two sold-out shows at the end of his U.S. tour, before returning to his home on O‘ahu’s North Shore. Political pundit Bill Maher has chosen the Shell for his regular New Year’s Eve stand-up appearance in Honolulu. Henry Kapono & Friends, including the late Robert Cazimero, played an epic show here in 2015.

Rare opportunity in a boutique building in Waikiki steps from Waikiki Beach, shopping, dining and fun! Conveniently located right off …

High Floor Waikiki Studio, Something for Everyone!

Home away from home. Starter home. Weekend getaway. This turn-key unit at the Fairway Villa can be all that and …

Diamond Head and Ocean Views From One of Honolulu’s Iconic Residential Buildings: 1010 Wilder

Welcome home to 1010 Wilder. Conveniently located near the heart of Honolulu. This 3 bedroom, 3 bathroom unit is located …