We continue to raise funds and accept donations through our non-profit arm to benefit Hawaii Island resident displaced by the volcanic activity in recent months. Please read on for more details about how you can help members of our community!

On June 5th, residents of Kapoho awoke to the catastrophic news that their neighborhoods were taken over by a fast-moving lava flow and all their homes were destroyed and gone. They had been evacuated suddenly in the middle of the night on May 30th, when the situation became dire. The lava flow, which originated (and continues to erupt) in Leilani Estates about 7 miles away, seemed to be making a beeline for the Kapoho area in the Lower Puna District. This is the largest District on the Big Island of Hawaii, yet somewhat removed from the most populous and popular tourist areas of Kailua-Kona and the Kohala Coast. We want to emphasize that the Big Island is more than 4,000 square miles in size, so while this is deeply impacting this community, volcanic activity is impacting a relatively small segment of the land mass of Hawaii Island. 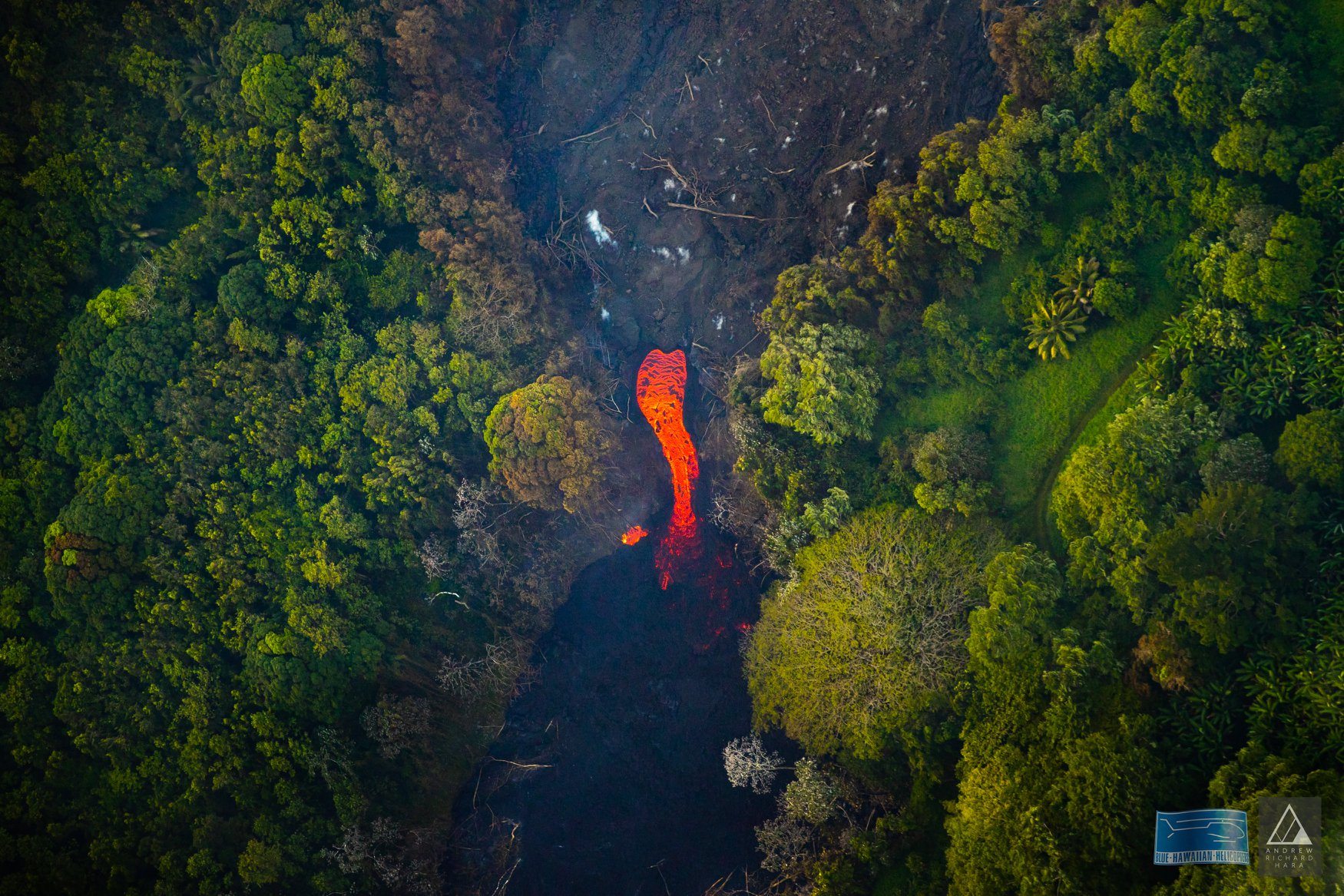 Green Lake lava fall, the evening of June 3, 2018. Photo Credit for this and the cover image: Andrew Richard Hara.

A Recent History of Eruptions & Earthquakes

The eruption started on May 3rd in the Leilani Estates subdivision, just outside of Pahoa, HI, after hundreds of earthquakes rattled the area for a week. The largest of these was 6.9 in magnitude. Portions of the neighborhood were immediately evacuated as cracks started appearing throughout the community and fissures of magma began erupting through those growing cracks. Days turned into weeks as the number of lava-spouting fissures grew and more and more homes were lost as other parts of the neighborhood evacuated, leaving thousands of people suddenly homeless. Highways were shut down in the areas south and east of Pahoa as the eruption carried on and grew larger. Those roadways, when deemed safe, were suddenly only accessible to residents. The National Guard was called in to assist in keeping the communities safe. Mayor Harry Kim issued a Proclamation on May 12th to cease all vacation rental and tourist activity in the eruption area until further notice.

The lava currently making its way down the Lower East Rift Zone (LERZ) originated from the , just one of Hawaii Island’s 5 volcanoes. The Hawaii Volcanoes National Park is located some 35 miles away. Hawaii’s volcanoes are shield volcanoes, which are different from other volcanoes in that they don’t erupt in grand fashion, like Mount St. Helen’s for instance. Because these lava flows are usually very slow-moving, lava tour hikes are a very popular tourist attraction and thousands of tourists flock to the Big Island to see these eruptions each year, especially where the lava flows enter the ocean.

The Kilauea volcano has been erupting steadily since 1983. However, in early May the magma drained suddenly and unexpectedly from one of the vents on Kilauea called Pu’u O’o, and then also from the famous Halema’uma’u Crater, whose lava lake only days before had spilled over and onto the crater floor, delighting tourists and residents alike who were viewing the rare spectacle from the Jagger Museum Overlook, inside Hawaii Volcanoes National Park. 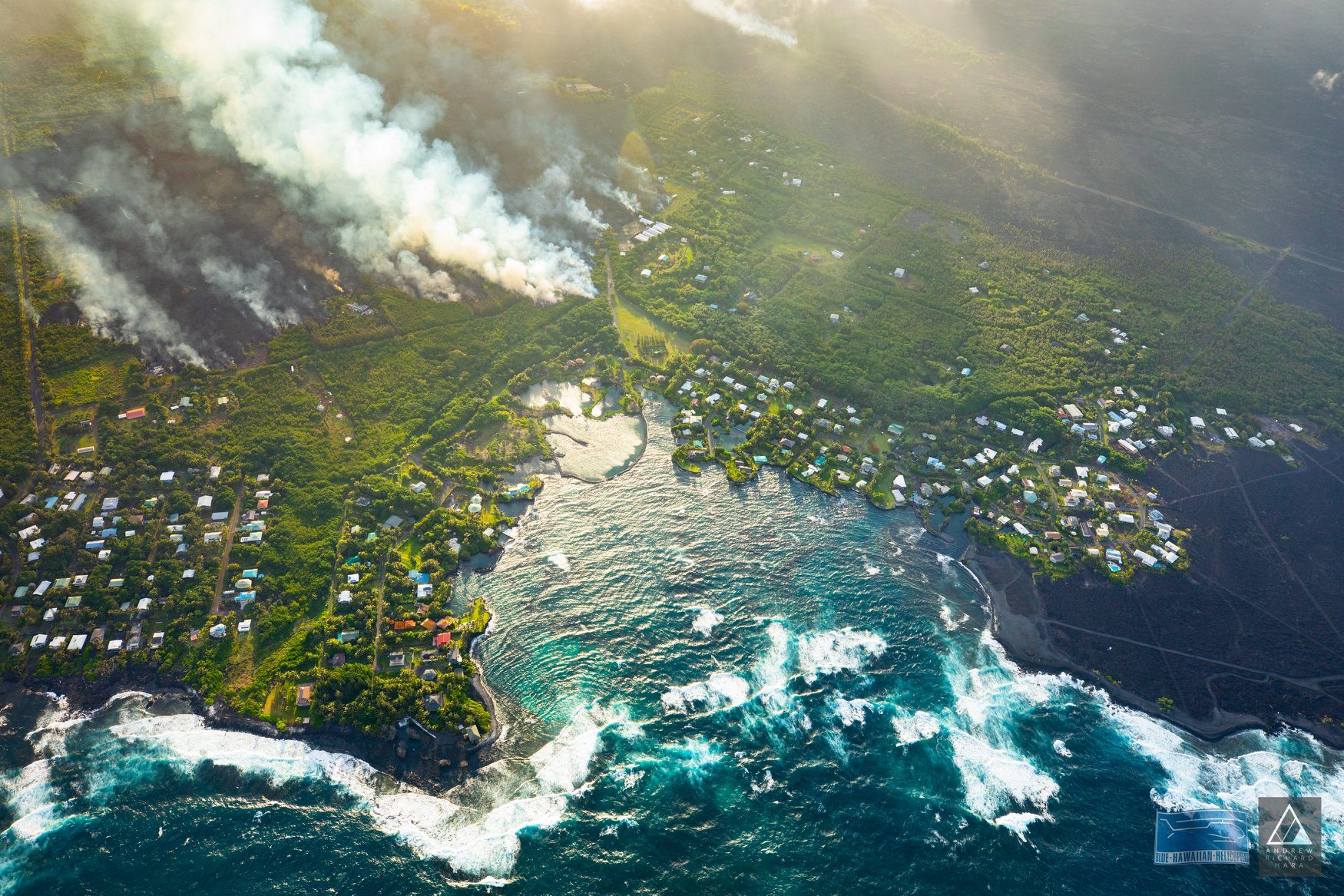 On or about May 27th, Fissure No. 8, located in the middle of the Leilani Estates subdivision, began erupting and fountaining hundreds of feet into the air. It was, and still is, a sight to see as it continues to erupt today. The magma erupting from Fissure No. 8 is producing millions of cubic meters of lava each day and continues to flow down the 7-mile colossal channelized flow it created, which covered the farm lots and subdivisions in Kapoho. The lagoons and tidepools, and even Kapoho Bay, are now filled with lava and it continues to spread and pour into the ocean. As of June 15th, the ocean entry is over a half-mile wide. The delta the lava is creating beyond Kapoho Bay continues to grow and changes the very shape of the Big Island every day.

Kapoho is the heart and soul of Lower Puna and has been for generations. It’s a popular vacation destination for people all over the world, and a weekend an holiday getaway for locals. Its many part- and full-time residents enjoyed calling this stretch of paradise their home year-round. The geothermally heated tide pools and lagoons are a source of wonderment as they contain some of the only coral reef systems on the Big Island. Vacationland, one of the 2 neighborhoods in Kapoho, is part of the Waiopae Marine Life Conservation District, a protected area for sea life and coral boasting some of the best snorkeling in the islands. Kapoho Beach Lots, the only gated community in Lower Puna, is famous for the Champagne Pond and other private tide pools and warm ponds lying within residents’ properties and backyards. Many of the homes in both communities were vacation rentals. 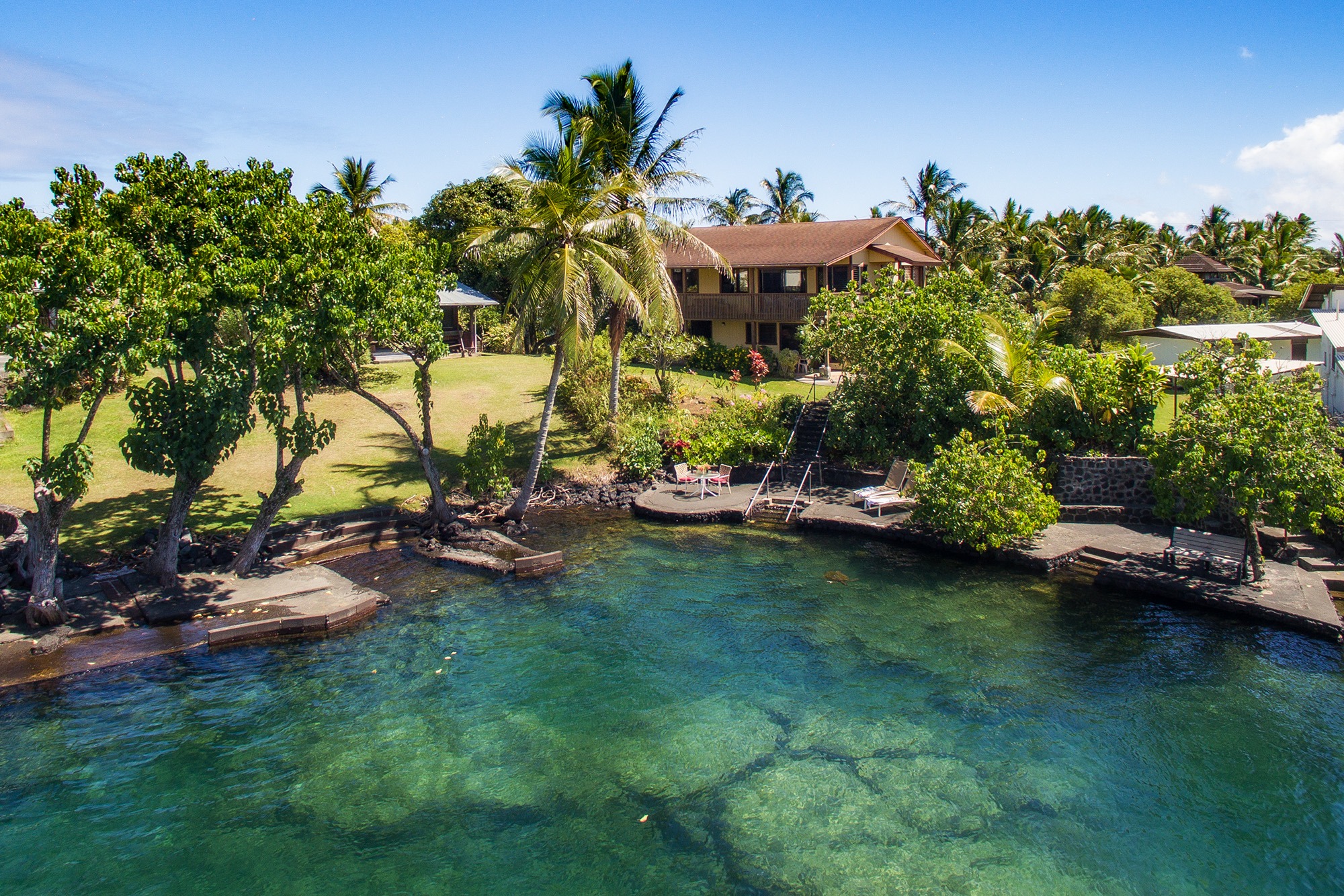 Some of the beauty that’s been lost in the Kapoho Bay area. Photo Credit: Byron Matthews

Residents and Vacationers Are Feeling the Loss

Hawaii Life Vacations managed 16 of these popular vacation rental homes. Hundreds of past guests have reached out to the East Hawaii Property Manager and Operations Director, Jeana Jones, expressing their grief and sorrow at the loss of such a magnificent place. Hawaii Life Vacations was proud to manage these wonderful homes for their wonderful homeowners, and we will miss Kapoho greatly. It’s hard to imagine life in Lower Puna without Kapoho and we mourn its loss with our community and those around the world who loved it.

Even though Kapoho has seen lava flows in its past, no one could imagine this happening. As a resident living on an active volcano, you always know that the threat of lava is very real, but the lava breakouts known by residents and seen in recent years have been very slow and steady flows, giving anyone in their path time to move and usually time to completely relocate. But this time, this was not the case.

Hawaii Life is grateful to be able to serve the community by helping several families and guests who were immediately displaced during the first evacuation crisis by giving them shelter in several of our available vacation homes in other areas. Many of the residents’ homes were completely lost, covered by lava. Other homes are still standing, but are uninhabitable due to giant ground cracks that formed as a result of the ground deformation. This is caused by the magma moving underground throughout the Lower East Rift Zone in Lower Puna. Those ground cracks are emitting SO2 and other toxic gasses causing much damage to the homes. 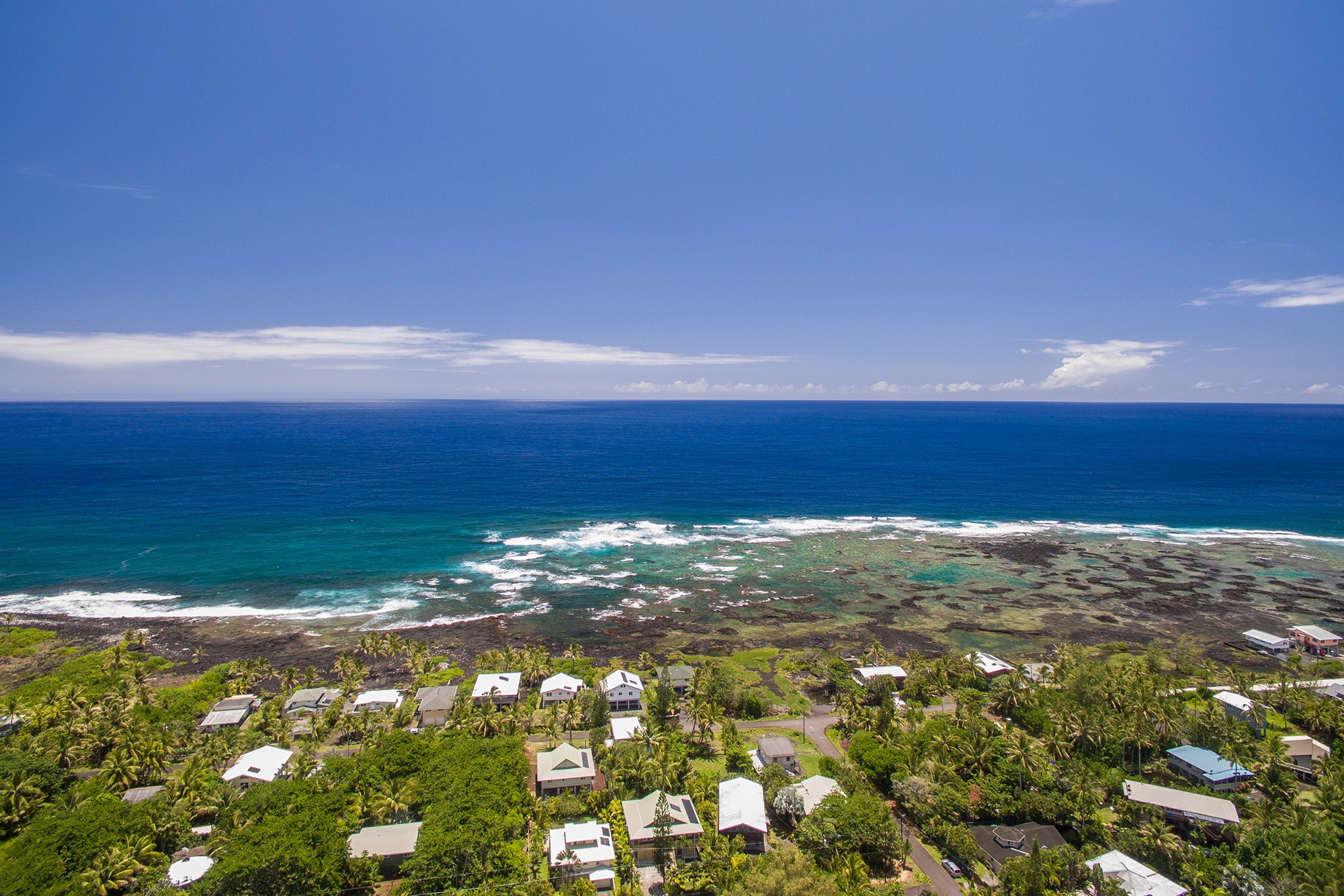 Some of the beauty that’s been lost in the Kapoho Bay area. Photo Credit: Byron Matthews

The people in these communities are in shock, many suffering from PTSD from the over 12,000 earthquakes since the eruptions began, and the sight of lava covering every square inch of the places that they loved and called home. To date, the lava flow has covered nearly 6,000 acres. It has taken more than 300 homes in Kapoho alone, and more than 600-700 homes throughout the community as a whole, a number that is expected to rise.

As you can imagine, the immediate needs are great. The need for temporary housing is tremendous. Most cannot afford to rent a vacation rental, even at a greatly reduced rate, if any are available. The shelters are at capacity and hotels are full. While many residents in Leilani were allowed back in, donning masks to protect them from the SO2 and other gasses, to retrieve their belongings when authorities deemed it safe, the residents of Kapoho weren’t so lucky. The lava that came so suddenly blocked all access and moved over the neighborhoods so swiftly, there was no time for them to return. Many residents left in the middle of the night with only the clothes on their backs when the authorities knocked on their doors at 1 a.m. and told everyone to get out as quickly as possible.

The Hawaii Life Charitable Fund (HLCF) was established with a mission to work to preserve Hawai‘i’s beauty and culture by supporting its people. It is supported through generous donations throughout the year from our agents, brokers and clients. The HLCF Board of Directors, led by Board Chair Mealoha Kraus, has launched a fundraising campaign to assist those touched by these events.

Please help us by donating today to support the more than 1,700 Hawai‘i Island residents who have been evacuated and displaced from their homes, and in many cases, from their livelihood, as well. The HLCF will match the first $20,000 in contributions received.

Please help us to support these families by making a contribution today. Your kind donation can be made online at give.hawaiilife.com, or by check made payable to the Hawai‘i Community Foundation, with the words “Hawai‘i Life Charitable Fund – Hawai‘i Island” in the memo line, to ensure your donation is earmarked for this initiative. Checks can be mailed to:

Cleared and Ready for Building!

N Pomaikai St, in Pahoa, Hawaii It’s not common to come across two vacant lots, side-by-side, that have been cleared …

Hawai’i Island, also known as the Big Island, is one of the few places in the world where you can …