Monster Homes – How Big is Too Big?

The proliferation of so called “monster homes” in Honolulu area neighborhoods is causing an outcry from members of the community who claim that the super-sized houses are putting a strain on the neighborhood and changing it for the worse.

Many of the lots in neighborhoods like Kaimuki are zoned R-5, which allows the building of one residence per 5,000 square feet of land. Many times this results in old homes being purchased, torn down, and replaced with multiple structures built on the property; however, monster homes differ from these typical multiple residence developments. These monster home structures tend to take up more than 75% of the lot space on which they stand, can have as many as 20+ bedrooms and often stand at 3 or more stories tall, built in residential districts. 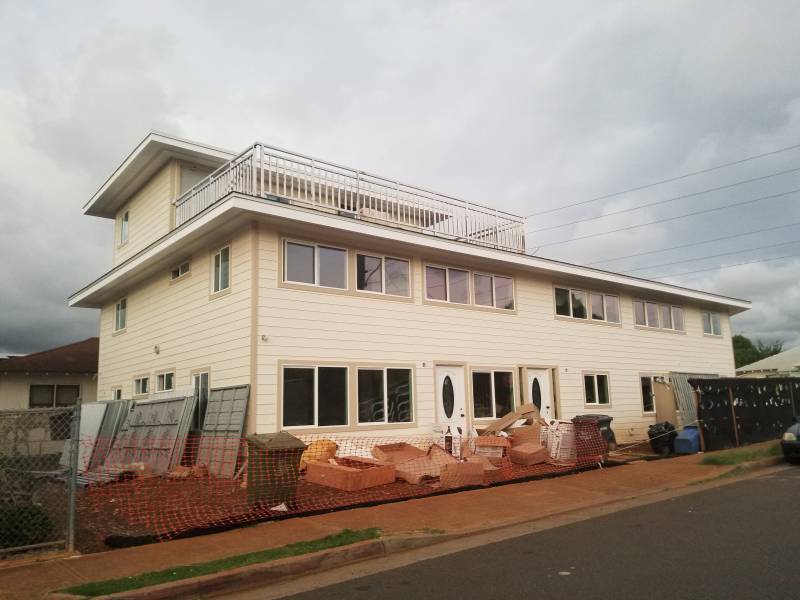 A Kaimuki “monster house” nears completion. One of many in the neighborhood.

There Goes the Neighborhood?

It isn’t easy for some long-time residents to stand by as their neighborhoods undergo such a drastic change. In many instances, mid-century cottages and plantations are torn down and replaced with structures that look more like apartments buildings than new home builds. Instead of a main designated front entrance, most have separate entrances, with multiple AC units sticking out along the facade, between the multiple rows of windows.

One major concern is that many of these ‘monster houses’ are being used as illegal apartments, vacation rentals, boarding houses and other businesses operating illegally and without a permit.

Supporters of these large home developments argue that they are just providing the city with exactly what is needed: more affordable housing. In addition to that, many owners have asserted that they are building for multigenerational families. Many in these neighborhoods are skeptical, especially when they hear that these huge structures have 20+ bedrooms in some cases.

Aside from the changes in the ambiance and character of the area, residents and officials are also worried that the increased number of tenants will put more stress on the infrastructure of the residential blocks themselves. Many are concerned that the residentially zoned neighborhood’s electrical grid, water, and sewer system will be overburdened. Critics of monster homes are quick to point out that the vast majority do not have any private, on-site parking, instead relying on the already scarce street parking.

Back in March, Mayor Kirk Caldwell signed Bill 110, a moratorium that banned all new construction of the super-sized houses. However, that does not mean that you won’t continue to see ongoing construction, due to the fact that the city had issued permits to many of the monster house developers prior to the March moratorium.

Bills 53 and Bill 50, are being moved through Honolulu City Council and will affect the continued and future development of these huge homes.

One of the biggest issues is that the city has issued “stop-work orders” to several different developers in the past, only to see them continue building despite the order. This is where Bill 53 would come in to play.

Bill 53 would increase the fine for those who continue to build after a stop work order is issued to $10,000 a day, or 10 times the building permit fee, whichever is greater.

This bill also mandates that for every instance in which a company violates a building code, the city’s Department of Planning and Permitting will have to alert the state’s DCCA office, which issues all of the professional licenses in the state. This is to add a layer of documentation and accountability, as well as facilitate communication between city and state.

Looking to the Future

On Wednesday, August 15th, the Honolulu City Council voted unanimously to pass both bills and referred them to the Committee of Zoning and Housing. In July, the Deputy Director of Planning and Permitting stated that if Bill 53 is adopted, his department would implement the new enforcement mechanisms provided for in the Bill.

There is a substantial amount of angst by members of the community who still see new monster homes continue to be constructed, months after they first heard that Mayor Caldwell issued a stop-work order on many. When taking into account the historic lack of enforcement, the existing loopholes and the grandfathering-in of certain developers, many are unsure of the future concerning these behemoth builds.

Mayor Caldwell says the city hopes to incentivize the building of monster houses in more appropriate areas, like those zoned for apartments and not residential.

Homes in neighborhoods such as Kaimuki have low turnover and when they are for sale, they don’t typically sit on the market very long. It’s all about location and with a close proximity to farmers markets, world-famous, beautiful beaches, Diamond head state monument, and a wealth of charming shops and restaurants, it’s easy to see the appeal. If you’d like to find out more about Honolulu area neighborhoods or need help getting a handle on the local housing market, please call, text or message me.

Two big homes were built right next door and it is being rented out to the most noisiest people. There are about 7 – 8 families hot related to the owner and they have parties almost every weekend. The children screams and cries all day and til late night hours of 12 midnight. I am ready to snap thats all I can say then maybe someone will stop this madness.

The Ultimate Dream A slice of heaven on the beach or ocean in Hawaii has become more rare. These coveted …

This 3 bedroom, 2 and a half bath townhouse just hit the market in Hawaii Kai. We would love for …