When you’re looking at a military move to Oahu, the question on most buyers’ minds is the commute time. Of course, you can live on base and have nearly no commute, but if you’re interested in expanding your horizons by living “in town,” as one of my earlier blogs discussed, where do you start?

The two big factors become commute and, if you have kids, schools. So, I designed the table below to help you determine what your drive-time tolerance is. If you’re coming from the D.C. area, as we did, my husband’s commute dropped from 1:15 by way of car, subway, and walking, down to 25 minutes by car. Great deal! If you’re used to a 10 minute drive, however, you may want to know that the drive from Hawaii Kai to Schofield Barracks is going to be a major lifestyle change at over an hour in the car.

The table below details commute times to various bases on Oahu on a typical Tuesday morning at 0800 on a day when school was in session. This data was collected from Google Maps. This table is meant to give you a general idea. It is not definitive, and I’d always recommend you drive the route yourself prior to committing to a home. 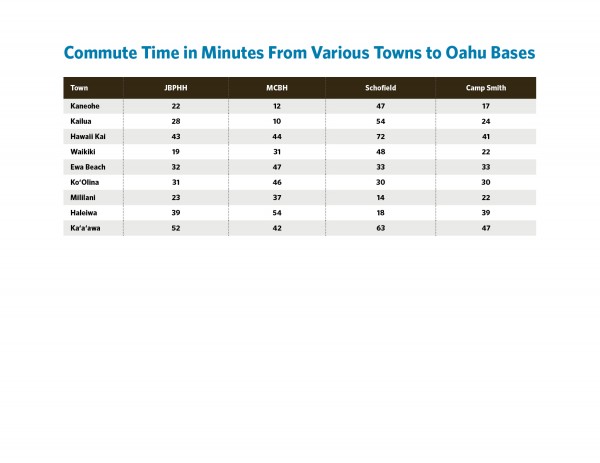 If you’re looking for a blank canvas with expansive possibilities in paradise, then you’re probably not going to be satisfied …