Christmas Eve 2013, I had 2 lovely guests in from California for Christmas. We’d done our fair share of SUP and kayaking at our beach earlier in the week, so were looking for something fun and a little different to do. Not that hiking is different mind you, but an Albatross Sanctuary? Most definitely so! 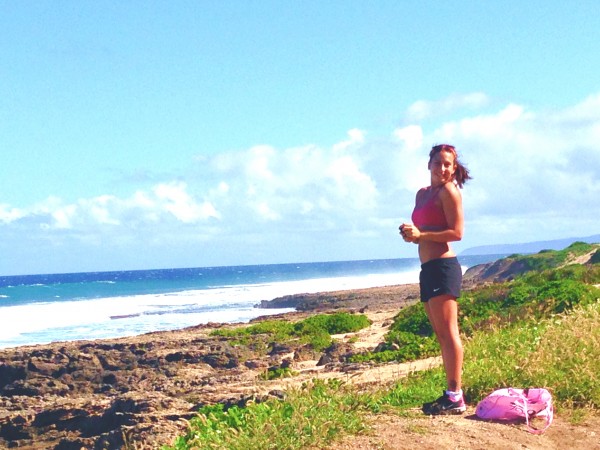 The sanctuary can be accessed from 2 different trails that meet in the middle at the reserve. One starts at the northern tip of the Waianae coastline at the end of Farrington Highway and the other at the western point of the North Shore in Mokule’ia.

My daughter, myself, and our 2 guests started out for the North Shore and made great time. Not too many people in the parking lot or on the trail, but it was hot! It’s basically a flat hike with a few hills. The most treacherous part of the hike, if you can call it that, is navigating the deep ruts in the dirt track and mud holes, a result of this area being popular with the 4-wheeling crowd. Some of the mud holes are quite large, and you’re going to get muddy!! 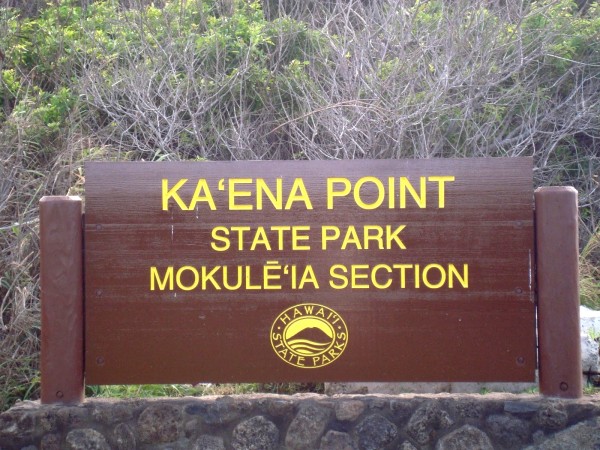 The hike itself, from the North Shore parking lot in, is approximately 5.75 miles round trip, and will take you about an hour and a half, each way, at a brisk pace, longer if you take a more leisurely stroll. Also factor in lots of observation time once you reach the sanctuary. 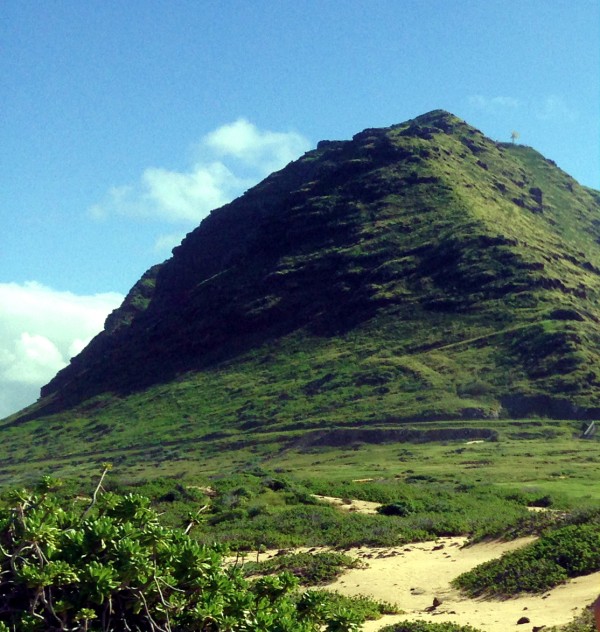 The vistas of the towering mountain cliffs of the Waianae Range on the left are a truly majestic sight, misty wisps of fog and water running down the crevasses that trail down the cliffs. The view packs a lot of wow factor. Even more so were the powerful, tremendous waves to our right (welcome to winter on the North Shore!). Stunning crystal turquoise waves crashing up on the black rocky beach. Dramatic and breathtaking! 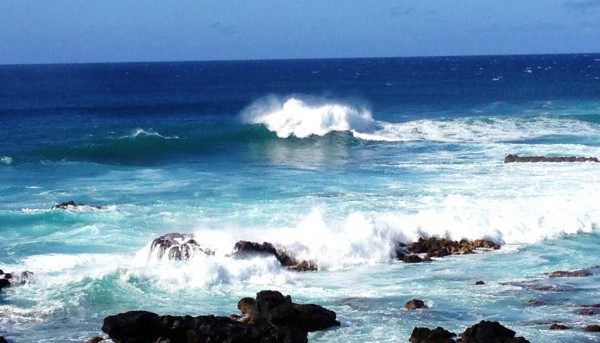 When is the last time you saw water this many colors? 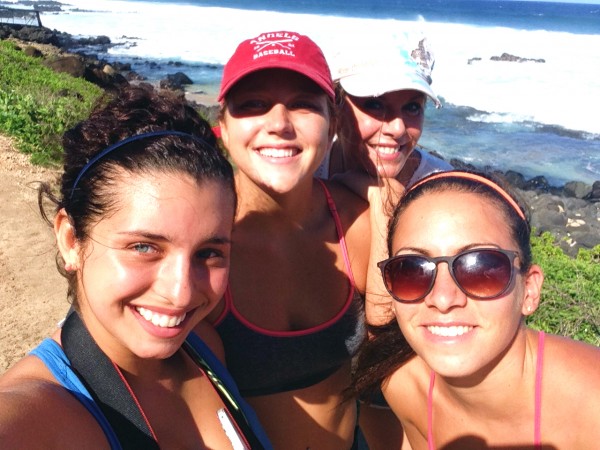 In the distance you will begin to notice some very tall fencing and eventually you will arrive at the Ka’ena Point Natural Area Reserve gate. Very important to follow protocol and rules, and make sure all gates are closed behind you. This is to keep out the predatory critters who attack the birds and chicks, and pillage the eggs. Until the fences were installed, feral cats, rats, and mongoose were killing 15% of the chicks annually. 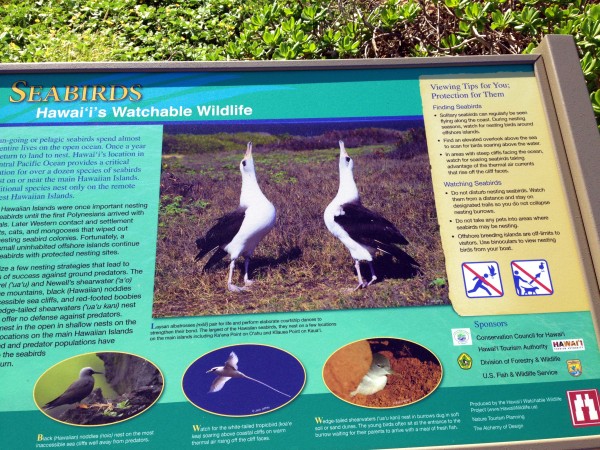 Something very important to note here. There are many signs that say no dogs. Seriously folks, leave your dogs at home. This is a nature sanctuary and there are many other hikes where your pups are welcome…just not here. Actually the first time I hiked here, there were two people we passed on the trail inside the fencing carrying “something” in their arms covered with beach towels. 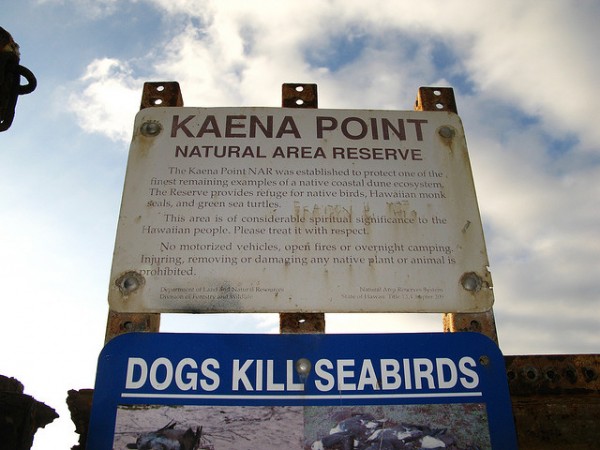 No dogs means no dogs!!

Now, I may not be a brain surgeon, but I’d bet my bottom dollar that there were dogs under those towels. Turns out I was correct. We caught up to them on our hike back to the parking lot and, sure enough, they had 2 Schipperke. Look it up. Defined as “able and enthusiastic hunting dogs.” Really? You brought your dogs that hunt into a bird sanctuary? More than disrespectful. Just sayin’. It took a lot of persuasion on my boyfriend’s part to stop me from calling Fish and Game. Ok, I digress…back to my story.

What Kind of Wildlife Can You Expect to See?

We entered the compound and saw what appeared to be prehistoric Pterydactils swooping through the sky in the distance. Nope…not dinosaurs, but glorious Laysan Albatross soaring. There are over 400 that spend the nesting season here. 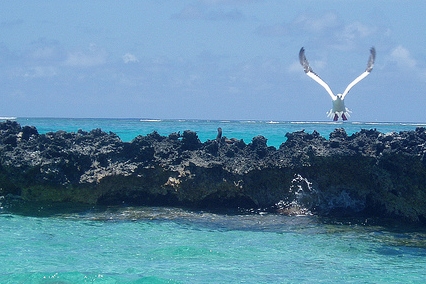 Have you ever seen one up close? They are huge! The size of a small Labrador retriever. Their wingspan is the longest of any bird, up to 11 feet wide. They live up to 60 years or so, and surprisingly, drink salt water! Gorgeous, impressive, and massive birds. 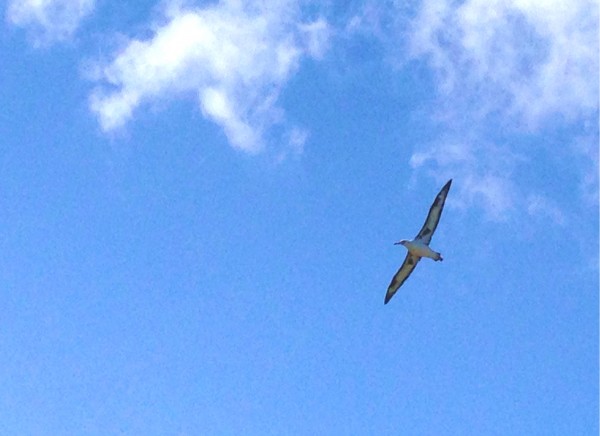 It’s all about the glide man!

We were so taken by watching them glide through the sky that we almost missed the ones nesting in the bushes just mere feet from us. Not a twitch of a muscle or the bat of an eye from them, tucked away in the bush, perched on their nests protecting their single egg. They were doing that funny thing animals sometimes do – stand or sit perfectly still and think you can’t see them. 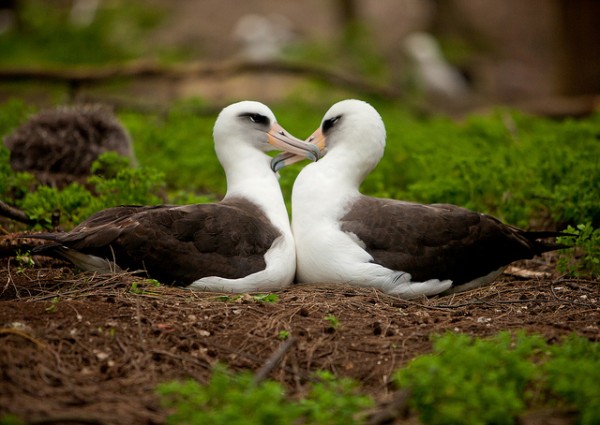 In the distance we could also see several pairs engaged in elaborate mating dances. Fascinating! We were just enchanted watching them. They are rarely seen on land and gather only to breed, at which time they form colonies on remote islands. 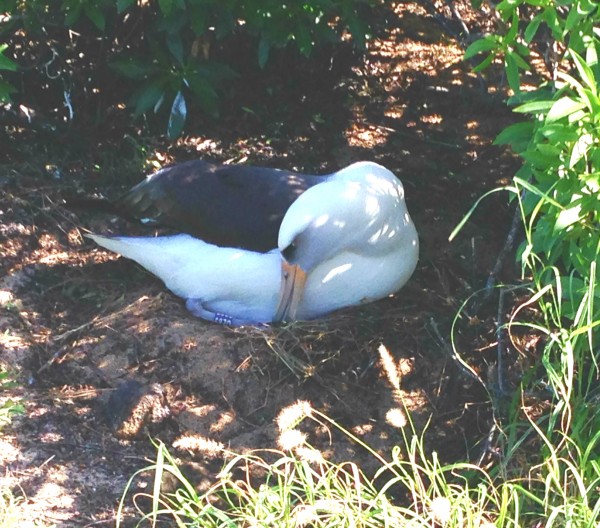 Nesting on a single egg, the females and males take turns

We are very lucky that the albatross calls this special place on Oahu home, year after year as they come back to roost. Kaena Point represents the only place in the world where albatrosses can be observed at these close quarters without supervision. The best times to see them are from around the holidays into early summer. After July, they migrate away North until they return in early winter. 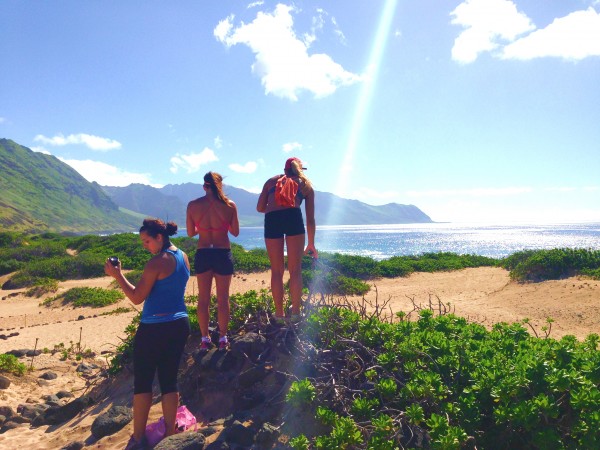 Looking over to the Waianae side

As we wandered to the tip of Kaena Point, we took a peek down to the tidepools and discovered several monk seals lolling in the pools, and quite a bit of brouhaha going on between them. The spats were a momma seal warning all the others from her baby. That’s one big baby! 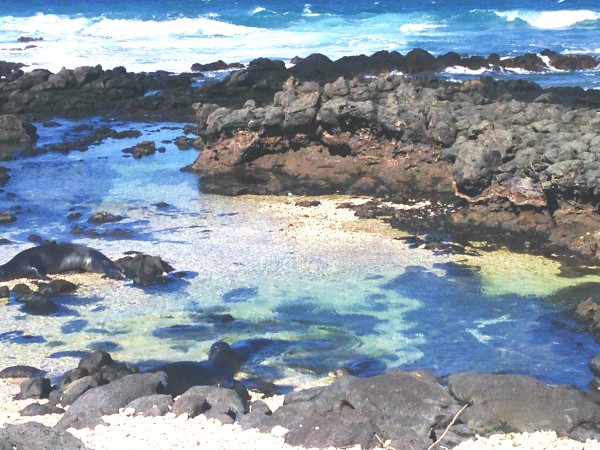 Baby seal was more interested in those of us standing on the shore watching, and decided to take a roll and skoochee up to us, because that’s how monk seals roll! Momma quickly followed and didn’t have to warn us twice to keep our distance! Yes, ma’am! 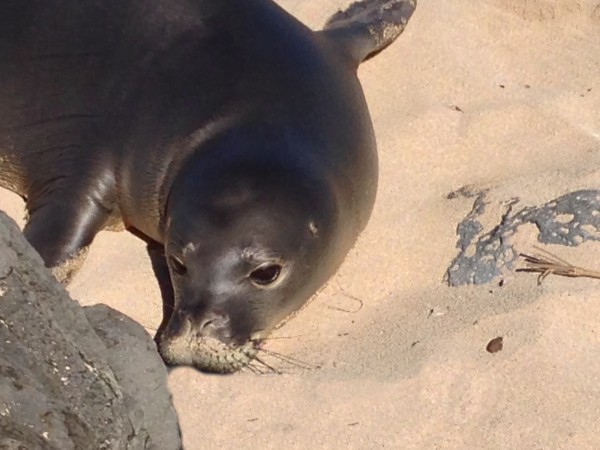 Say aloha to my lil friend! (taken with a telephoto lens)

Hawaiian monk seals are one of only 2 monk seal species left in the world, the other being the Mediterranean monk seal. It is also the only seal native to Hawaii, is an endangered species, and is protected as such. 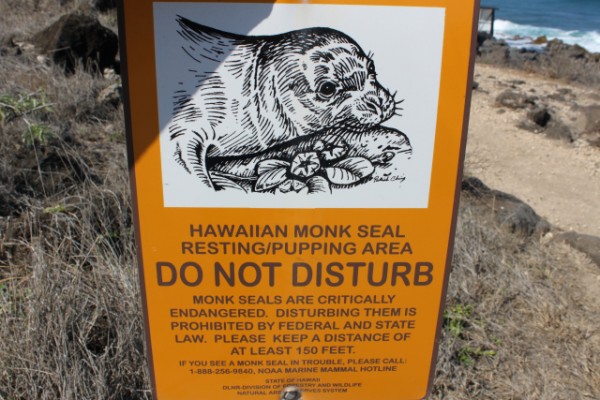 Sadly for us, we never did see any Humpback whales, but I understand that in the winter months, they are often seen offshore during the hike. 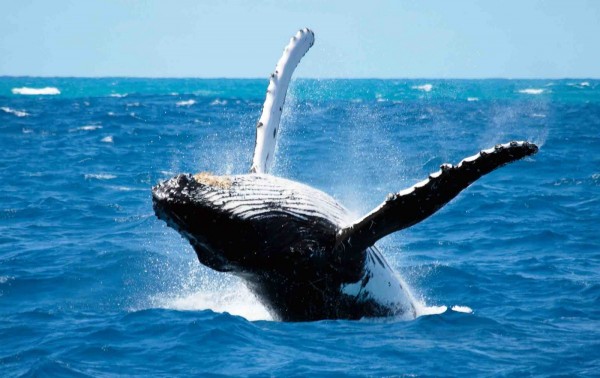 So sad we didn’t get to see a humpback whale

This is an easy hike, but did I mention it gets hot?! Even so, it’s a great hike for families with kids since it’s not so hilly. If you go with young ones, be prepared for a hitchhiker wanting a piggyback ride on the way back to your car! A lot of the kids we saw just got tuckered out from the heat.

Try and go early to avoid as much heat and remember the essentials for hiking in Hawaii: lots of water, a hat, sunscreen, comfortable shoes, snacks, and also a swimsuit. Since you are on the North shore you may as well head over to Waimea Bay for a swim! 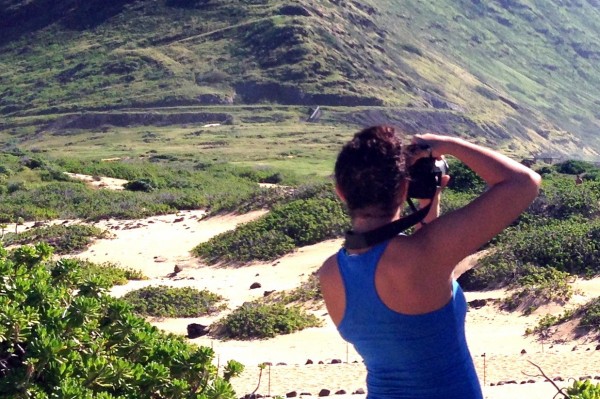 Saw thousands of shearwaters nesting in the sanctuary in November, and some early whale activity as well. Lots of albatross when we were there today (6/7/15). And you’re right, it gets very hot. Not a good hike for those who don’t handle the heat well. Another beautiful day, even if we saw no monk seals this trip.

Saw thousands of shearwaters nesting in the sanctuary in November, and some early whale activity as well. Lots of albatross when we were there today (6/7/15). And you’re right, it gets very hot. Not a good hike for those who don’t handle the heat well. Another beautiful day, even if we saw no monk seals this trip.

Great article….great pictures too! My wife and I spent Christmas Day 2008 here at Kaena Point! It was unforgettable. Thanks for posting

Great article….great pictures too! My wife and I spent Christmas Day 2008 here at Kaena Point! It was unforgettable. Thanks for posting

Welcoming You Back to Hawaii Island – Enjoy a Virtual Visit!

With travel restrictions lifted and social distancing still being practiced, I welcome you to Hawaii Island – virtually, that is! …

Thinking About Moving to Hawaii?

Have you recently been thinking about moving to Hawaii? Maybe now so more than ever — with the ability to …

Prepping to Sell Your Home

Kapalua Bay Villas is comprised of 141 units, located in 27 two and three story buildings, along the Kapalua coastline, …