So congratulations on making the decision to move to the Big Island of Hawaii. It’s not easy to do but now it’s time to take action. Some people that I have worked with simply show up with their suitcases in hand and want to buy a property that is being sold furnished. But if you want to bring all of your belongings the key will be choosing a mover and understanding the cost.

Pare Down Your Belongings

First off, let’s look at where you are coming from. Are you moving from a climate that has traditional four seasons? If so, I can tell you right now that I moved all of my winter clothes here and they have done nothing but collect dust and take up space. Consider selling or donating them. You simply will not use them here. The other item is dressy clothes. I have a number of custom suits from previous positions I had on the mainland. I can’t think of one occasion where I have ever needed to wear one. In fact pants overall rarely are ever worn here. Even on the fanciest of occasions — the Kona suit, complete with Hawaiian shirt and shorts — is acceptable.

This is a prime time to take stock in everything you own and consider if it is really needed in Hawaii. Space is limited here so bringing absolutely everything might not be the best idea. This is a great time to have a yard sale, give away items to family and friends that they might appreciate, and even consider storing certain things in a family member’s home or even a storage facility on the mainland. The less you bring, the easier the move will be. 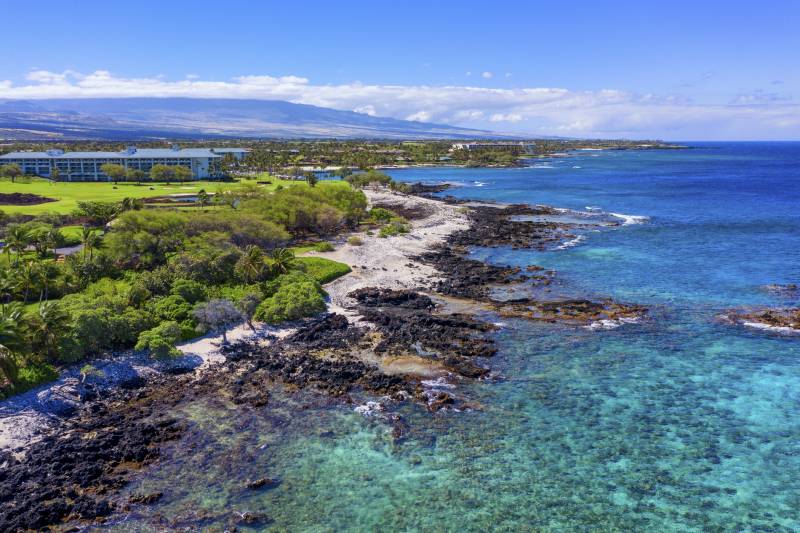 How Much Does It Cost To Move To Hawaii?

Now one of the questions I receive the most is how much does it cost to move here and which company should I use? Let’s cover the cost first. I moved here from Atlanta and had 8,500 lbs of household goods. The charge was $1.70 per lb. You also will incur an option to add insurance to this cost to protect everything fully that ships. We probably brought more here than we should have but it equated to three bedrooms and 2,000 Sqft of household goods. That cost just over $18,000. It was picked up June 6th and arrived on the Big Island July 8th. It is safe to assume 4-6 weeks for shipping, less if you originate on the west coast. So bottom line you are looking at a cost of between $5,000 and $20,000 to move household goods roughly based on the size of the load you ship.

How To Ship Your Belongings To Hawaii

Now that you have an idea on price, let’s discuss the companies available to ship your belongings to Hawaii. I had an experience moving from California to Georgia where I went with the lowest bidder. This is simply not a time and place to be cheap. When I went with the lowest bidder the pick up from California went very well and I felt happy about the decision I had made. Then after the truck left the problems started. It took three extra weeks on top of what they quoted for our items to arrive. On top of that, when they finally did, a Ryder truck pulled into my driveway with one mover. He got out, cigarette in hand, and told me he was here to deliver my household goods. He alone was going to unload the entire truck. I can still recall how angry I was. So many boxes were torn open, items broken, some items missing that we never saw again. Then I watched in horror as he tried to move our washer and dryer out of the truck by himself. I spent the rest of the day helping him and ended up nearly in court fighting to get compensated for my time and items that had been damaged. I wished I had not gone with the lowest bidder to say the least. In my experience moving to Hawaii it was far different. After soliciting many quotes I went with Royal Hawaiian Movers and couldn’t have been happier. Their cost was a bit higher than other quotes, but well worth it. They showed up on time and carefully packed each item with the care that everything was their own. From cleaning up after themselves to taking a part furniture the crew was as professional as they come. When everything arrived in Hawaii it was a breeze to schedule delivery and everyone was just as professional on this end. Nothing was broken and items were reassembled with ease.

Just to give you another option outside Royal Hawaiian, my back up was to use the Kona Container Guy. They are a great locally owned company that will arrange to have a large crate brought to your home that you can either pack yourself or have professionally packed. Those would be my two recommendations for relocating your personal belongings. In my next blog post in this series, I will discuss shipping your vehicle.

Love the tips you are willing to advise. Your story sounds very much like ours, except we are ARE retired and anxious to move from Bluffton, SC to Kauai. Full disclosure- are working with a Coldwell Banker agent there. (on line only at this point).

I will continue to view your blog posts and make notes. If you could share any info. that pertains to Kauai specifically, I would greatly appreciate that. I’m sure that Byron at Coldwell can also give advice, but as you have actually made the move to Hawaii , I feel
you offer a realistic pros & cons perspective.

Mahalo for taking the time to read my blog Judi. I don’t have any experience with Kauai but I have many colleagues on Kauai that do. Please let me know if any specific questions come up that you might like addressed.

I loved your blog and thanks for publishing this about choosing moving company I am really happy to come across this exceptionally well written content. Thanks for sharing and look for more in future!! Keep doing this inspirational work and share with us.If possible visit this website Printstocknz.com to gain more idea or tips on the same.