Behind the Scenes Filming of HGTV’s Hawaii Life

The HGTV series Hawaii Life is in its second year of filming. It is a House Hunters type of show with the added lifestyle of Hawaii Life, being broadcast on HGTV. This show is a big hit with a viewing audience of 15 million people worldwide. 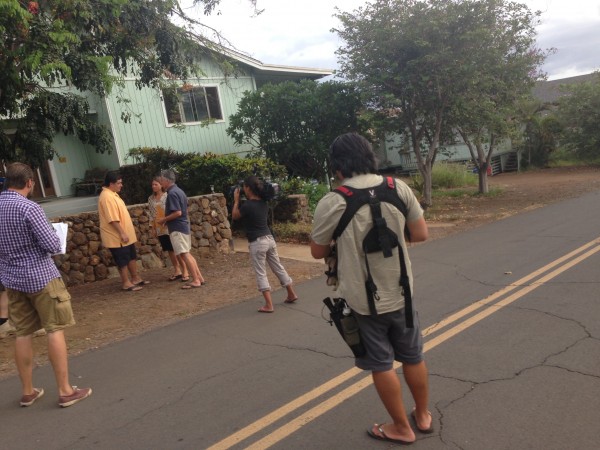 It was just so interesting watching all of the crew interact with each other, so carefully getting shots of the house, people, and area. You can tell they just love what they do, getting everything just right and being so careful trying not to disturb the privacy of the occupants or neighbors.

Let me tell you that it is the real deal. I was skeptical at first of reality shows in general.  I had always thought they were completly scripted, but not so. It was very refreshing to see they did not script the show. The director would ask the buyers what they see, what they think, and then they just get them to verbalize their thoughts on film. Notes are taken of the buyers’ comments and they use that information from the buyers to contribute to the commentary for the filming. The comments of the buyers were all real and came from them.

The buyers are all real too – the production company does very detailed interviews before the filming finding out what the buyers are looking for in a home and their future life in Hawaii – this is what they incorporate into the filming. They want to make sure they find real buyers for the show, sure there are a lot of people who buy property in Hawaii who are investors, but for the show they are looking for the people who want to move to Hawaii to live.

All in all, it was a fun experience to have been involved with. (Who ever came up with this idea?) It was such a great idea to do a show about Hawaii Life and share it with people all over the world who have thought about moving to Hawaii, showing them that it can really be affordable and a great place to live.

The Maui Meadows subdivision, which is right on the borders of Wailea and Kihei, is a great opportunity in the highly desirable area of South Maui for those who want a larger parcel of land.

Most lots are 1/2 acre or larger – rare for South Maui. Also many lots have a second dwelling “cottage” already built on it for income, or use as a caretaker’s cottage.  Some just have one house built and leaves you the ability to build the second dwelling to your own specifications.  If you are looking for that larger parcel of land and want to be in South Maui, be sure to look into Maui Meadows. Click on the link to see the current inventory which is always changing, so be sure to give me a call for the most updated information. Maui Meadows listings.

This subdivision is so popular because it is very close to the great sandy beaches of Kihei and Wailea with the added benefit of more space to spread out for gardens and privacy. I was hoping to include the link to this listing, but it has already sold.  The buyers on the show did buy a house in the Maui Meadows subdivision, just not this particular one.

When Can You Watch Hawaii Life on HGTV?

The Ultimate Dream A slice of heaven on the beach or ocean in Hawaii has become more rare. These coveted …

This 3 bedroom, 2 and a half bath townhouse just hit the market in Hawaii Kai. We would love for …