The Amazing Story of Macadamia Nuts in Hawaii

Macadamia nuts trees were first brought to Hawaii by Big Island plant collector and investor, William Purvis after a trip to Australia in 1881. Not seeing the potential of macadamias for nut production, Purvis planted his trees as ornamental windbreaks among a few sugar cane fields on the Hamakua Coast. Purvis would make a second miscalculation by introducing mongoose to the plantation. Mostly active during daylight hours, mongooses did little to control the rat problem but were successful in pushing many of Hawaii’s native birds to extinction.

In 1899 the worldwide coffee market collapsed and Kona area coffee plantations were largely abandoned by big money investors in favor of the booming sugar industry. The small, steeply sloped, labor-intensive coffee plantations were leased out to immigrant families that had come to work in the plantations. Some of these small farms began to plant macadamia nut trees as a supplemental crop for local consumption and as a source of food.

Shortly after Hawaii became a territory of the United States in 1900, the Hawaiian Agricultural Experiment Station (HAES) was established to develop new crops for Hawaii. The government saw the new territory’s almost singular reliance on sugar as undesirable and wanted to develop a secure local food supply for the islands as well. The station had inherited several previously planted macadamia nut trees and work commenced on developing them as a viable crop for Hawaii.

In 1910, researchers began encouraging the planting of macadamia nuts as a crop to supplement coffee in the Kona district. While some coffee farmers planted a few trees for nut production, plantings were still mostly ornamental. A large planting or macadamia nut trees was undertaken in 1916 as part of the reforestation project on the Hamakua Coast of the Big Island. The economic potential of macadamia nut production had yet to be realized.

Even though in both 1918 and 1919, the HAES distributed many free macadamia nut trees to coffee growers for planting there was little interest in macadamia nut trees as a crop. From 1920 through 1930, the price of coffee remained high and even a 5 year tax exemption on land used solely for macadamia production introduced by the territorial government in 1927 was mostly ignored.

The growing presence of roasted macadamia nuts in stores spurred increased interest in macadamia growing. Trees planted for nut production grew from 423 acres in 1932 to 1,086 acres in 1938, but another slump in prices at the end of the decade again put the industry in jeopardy. 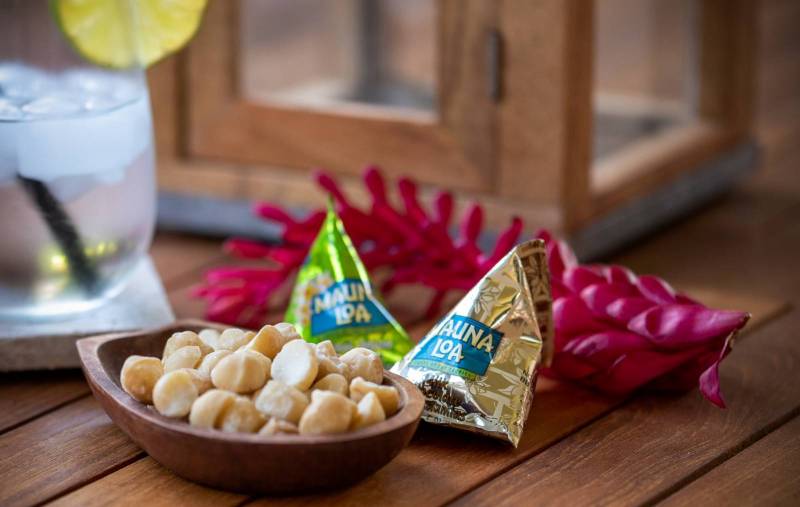 In 1937, the first successful grafting of a macadamia branch was reported in the distinguished journal Science. During the following decade, the HAES tested different varieties of cloned macadamia nut trees at various locations on Oahu, Kauai, Maui, and the Big Island. In 1947 they announced the development of trees that produced higher quality nuts in much larger quantities that could be grafted onto existing rooted trees. In 1949, Castle & Cooke began planting a 1,000 acre macadamia nut orchard just outside of Hilo.

As one of Hawaii’s “Big Five” companies, mostly descended from plantation owning missionaries, Castle & Cooke’s entry into the macadamia nut business marked the beginning of Hawaii’s position as the world leader in macadamia production. Just as their newly planted orchard began production in 1953, Castle & Cooke launched the “Royal Hawaiian” brand which established macadamia nuts as a popular specialty snack among American consumers. The United States, led by Hawaii, would continue to reign as the world’s leading producer of macadamia nuts until 1997.

While Australia took over from the U.S. as the new leader in macadamia nut production, they were soon joined by competition from at least a dozen other countries. Kenya, Bolivia, Israel, Malawi, and South Africa were all developing successful plantations. 2006 saw a slump in prices due to a worldwide oversupply. By 2008 the price of macadamia nuts had crashed so far that even harvesting the nuts was uneconomical. Big Island macadamia farmers began simply letting the nuts drop and rot under the trees.

A combination of lower worldwide yields and higher prices has encouraged farmers in recent years. Although there will doubtlessly be challenges, farmers remain hopeful for the future of macadamia nuts in Hawaii.

Want to own a Macadamia nut farm?

There are many other properties that have a small amount of mac nut trees. Here is a sample list that goes from Hamakua up to Hawi down to Captain Cook.

I want to be queen of the Isle of Macadamia. How do I do that?

When you hear the word “paradise,” what comes to mind? Perhaps you envision untouched natural beauty. Sublime landscapes as far …

Peerless in sweetness, the Kauai Sugarloaf Pineapple has been said to taste like cotton candy. These tasty treats are so …