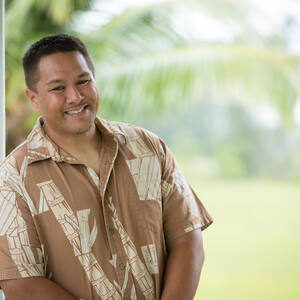 Bronson attended preschool, and enrolled in Waiakea
Elementary, Intermediate and High School where he made national honor society. He competed in his high school Air Riflery team during his 4 years before Graduating in 2004 where his Team won BIIF’s every year and won the States Championship.

Bronson worked at a nursery, carpenters apprentice and campus center dinning all while attending as a full-time student at University of Hawaii at Hilo. He graduated with his Bachelors Science in Agriculture.

After finding out that the community had no available opportunities to practice his newly acquired college achievement, Bronson took a complete 180 degree turn away from his College degree and became an entrepreneur owning and operating a few businesses that is still currently active. Being instilled at a young age to “Work hard” and “Always Respect your elders”, Bronson was able to accomplish and build these business with the help and support of his Ohana.

Now he owns and Operates a family food service business along with a Professional Property Preservation company that pairs well with his REO Team at Hawaii Life. Bronson has nearly over a decade of Property Preservation experience where her serves clients such as Freddy Mac, Penny Mac, Wells Fargo and BOH just to name a few.

Bronson Acquired his Real Estate Sales Person License in 2016 with the help of Marty and Heidi Smith, owner and Brokers of Kohala Resort Realty LLC. One of the leading brokerage in all aspects dealing with the world of REO here on the Big Island of Hawaii.

Year 2021, Bronson is now a Licensed Realtor with Hawaii life and is still active in both REO transactions along with all other traditional sales and purchases. He looks forward to helping his clients big or small, everyone and every transaction will be treated with respect, honesty and integrity to the highest standards.

View all of my sales...
Bronson Domen
REALTOR SALESPERSON (808) 345-1804 ‮mnullonullcnull.nullenullfnullinulllnullinullinullanullwnullanullhnull@nullnnullenullmnullonulldnullnnullonullsnullnnullonullrnullbnull Working primarily out of the Hawai'i Life Hilo Office