The Mauna Loa eruption in December was a significant event that had a large impact on the local population as well as the broader scientific community. Located on the island of Hawaii, Mauna Loa is one of the world’s most active volcanoes, and its eruptions are known for their size and power. The November-December eruption was no exception, with lava flows reaching up to 15 miles from the summit and ash plumes rising as high as 20,000 feet into the air. 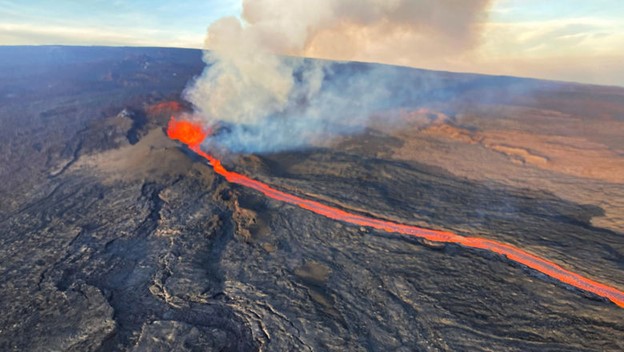 The eruption began on November 27th, with a series of small earthquakes and ground deformation indicating that magma was moving within the volcano. Over the following days, the activity increased, with lava fountains spewing from the summit and lava flows spreading out from the vents. Scientists were initially concerned the lava flows would cross the Daniel K. Inouye Highway. However, these lava flows ceased 1.9 miles from the highway.

Adding to the scientific phenomena is that Mauna Loa’s sister volcano – Kilauea – has been erupting since last year. According to Hawaii Volcanoes National Park this dual eruption event is extremely rare.

Geologists and other scientists were able to gather valuable data on the eruption, including information on the types of lava being erupted and the rate at which it was flowing. This data will help scientists better understand Mauna Loa and other volcanoes like it, and potentially predict future eruptions.

Adding to the tumultuous conditions caused by the eruption was the snowy conditions in December. The snow was the result of a cold front that brought freezing temperatures and snow to the summits of Mauna Loa and Mauna Kea. This was a source of excitement and joy for many people, locals and tourists alike. They made the most of it taking to social media to share photos and videos of the lava during the first couple of weeks of December and snow on the latter part of the month. What an incredible month it was. Only in Hawai’i … the Big Island of Hawai’i that is.

Give me a call at 808.938.3910 or email me if you are interested in learning more about Mauna Loa or anything in general about life on the Big Island of Hawaii.

Volcanoes Make the Most Beautiful Sunrises

The Silver Lining of the Mauna Loa Eruption When I woke up last Sunday night, November 27, around 12:30 am, …