As with any culture, Hawaii’s story is woven with legend and history, fact and fiction, here are some thoughts for you today.

It is bad luck to take volcanic rock or sand from Hawaii.  Legendary Goddess Pele, pronounced peh-leh, the goddess of fire, lightning, wind, dance, and volcanoes, it is said, exacts her revenge upon the thief.

Fact:
* the post office reportedly receives hundreds of pounds of rocks each year by mail!

Pele’s home is believed to be Halemaumau Crater at the summit of Kilauea, one of the world’s most active volcanoes.  Although it is prohibited to take lava rock from any of Hawaii’s national parks the story of Pele’s vengeance was apparently made up by a park ranger to be a deterrent to people helping themselves to the volcanic rock as a souvenir of their visit.

When I was a young girl living in Honolulu, my sister Tina had a field trip with school to the Big Island where she collected “Pele’s tears” which are small teardrop-shaped volcanic fragments.  She returned home with her token bounty.  Was it coincidence or Pele’s revenge that within the week of my sisters’ return home our house was burgled?  As an impressionable young girl of 12, who just had all her birthday presents stolen, I believed the legend.  And therein my respect for the vengeful Pele was born and firmly rooted.  My sister shortly after that event sent Pele’s tears back to Volcano National Park to undo the “curse.”

Myth or confirmation bias? Whatever it may be, the volume of incoming rocks by mail seems to favor the legend.  As a Concierge, I witnessed this first hand, shoe boxes filled with rocks and coral shipped back with the anonymous plea, “please return to the land!”

Fact. Lava rocks that are taken from Maui County (Maui, Lana’i or Molokai can be returned to Haleakala National Park at P.O. Box 369, Makawao, Hawaii 96768-0369.

You may also send your rocks with a donation and have the rocks returned and a blessing placed over you. 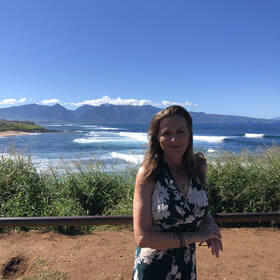 Another Amazing Year for Puamana: Over $40M in Sales – Check Out My 2022 Year End Wrap-Up

We’ve had a stellar year in Puamana with over $40M in sales volume, although most of the sales were made …

Looking for oceanfront property on Maui? There are 11 properties under $10M at the time of writing this blog. Click …

Thanks to Maui’s ideal climate and fertile soil, we’re fortunate enough to have farms on every part of the island, …