Cherry Blossom Festival on the Big Island of Hawaii

What the Cherry Blossom Represents

Japanese Sakura Trees also known as cherry blossoms have a long history and a special mythological significance about nature. Cherry blossoms are a symbolic flower in Japanese culture of life, death, and life’s impermanence.  Japanese culture and literature are rich in motifs and themes intertwining nature with life’s constant fluctuations. In Japanese culture, spirits, or kami, are believed to inhabit old trees or Kodama. 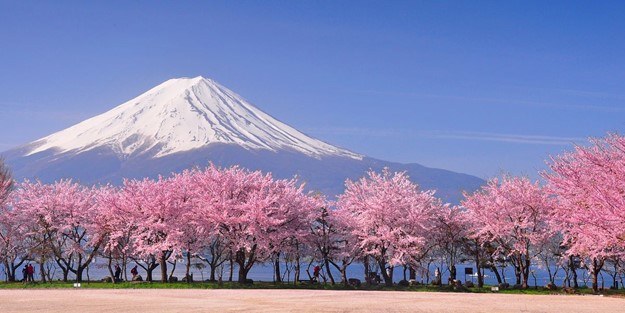 One of the most famous mythological tales of the Cherry Tree is the Milk Nurse Cherry Tree. It was said that this tree blossoms on the anniversary of the death of a wet nurse who sacrificed her life and soul to save a child she cared for.

This is the Japanese character for Sakura. The 木 (ki) on the left side means tree/wood and developed from a pictogram of a tree, with the horizontal line as branches and diagonal lines as roots. With Hawaii’s rich blend of Japanese and Hawaiian traditions, a unique festival to celebrate and honor Sakura on the Big Island was born. The Waimea Cherry Blossom Festival was due to celebrate its 29th rendition this year. However, with great regret, this year’s festival has been canceled in the best interest of public health. To honor the memory of the festival we’ve elected to give a short history of Sakura on the Big Island and how the festival came to be.

How Sakura Came to Hawaii

When Sakura were brought to Hawaii, they brought their mythological significance as well. Sakura first arrived in the United States in 1912 when David Fairchild, USDA Director of seed and plant introduction, promoted the idea of bringing Japanese Cherry Blossom Trees to Washington D.C. Today the Japan-US cherry blossom gift symbolizes the friendship between the two nations. 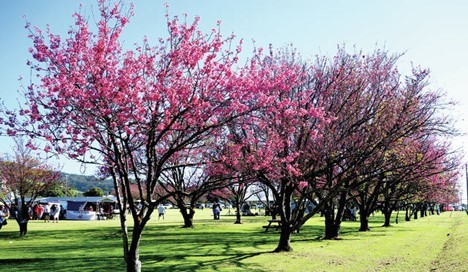 Bringing cherry blossoms to Hawaii was a bit more difficult due to Hawaii’s subtropical climate. Cherry blossoms thrive in more temperate weather and so in 2012 Dr. Tetsuo Koyoma, director-general of the Köchi Makino Botanical Garden in Köchi Prefecture, set out to find native cherry blossoms that would bloom in Hawai’i. He elected to plant the trees in Waimea on the Big Island where the climate reaches cold enough temperatures to create a spring bloom. And thus, the Waimea Cherry Blossom Heritage Festival was born.

Celebrating the springtime Sakura dates back to 7th century Japan. Cherry blossoms signified the beginning of the spring planting season and viewed the blooming flowers as a favorable sign that gods were coming to the village to provide a full harvest come autumn. Farmers would pray, enjoy a feast, and make offerings annually during this time.

In Hawai’i, the festival is an opportunity to celebrate cherry blossom viewing also known as Hanami. This time of year, Church Row Park in Waimea is bathed in the bright pink colors of the Sakura. Beyond its traditional roots, the Waimea Cherry Blossom Festival is a testament to the harmonious merging of Hawaiian and Japanese culture.

Kikuko Kibe, who brought the art of origami to festivalgoers for the past two decades was meant to be an honoree at this year’s festival. A native of Japan, she will be celebrated and remembered for her demonstrations showing attendees how to craft tulips, boats, and animals with Japanese origami techniques. Despite the hardships of COVID, the cherry blossoms are still able to be viewed and celebrated as a reminder to appreciate the life we’ve been blessed with.

Give me a call at 808.938.3910 or email me if you are interested in learning more about cherry blossoms in Hawaii or anything in general about life on the Big Island of Hawaii.

Come build your dream home! This is an incredible opportunity to purchase 34 acres at an elevation of 500′ with …

As we advance into the second half of 2022, the Kona-Kohala Coast real estate market is still witnessing unprecedented levels …

3 Reasons Why Vacation Rentals Are Still a Great Bet!

I have had the opportunity to serve many investors purchasing vacation rental properties in West Hawai’i. As the market seems …

Cleared and Ready for Building!

N Pomaikai St, in Pahoa, Hawaii It’s not common to come across two vacant lots, side-by-side, that have been cleared …