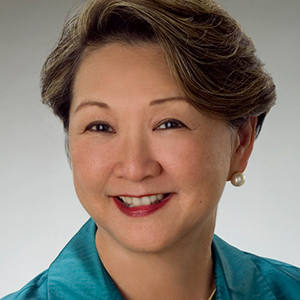 Sharon Kim Venegas received her Realtor Associate designation in 1982 and specializes in residential real estate. She has worked with buyers and sellers across O‘ahu and is a multimillion dollar producer who has been with The CHOI Group since 1995.

From 1980 to 1988, Sharon worked at the State Legislature as secretary and office manager for the former Senator Ann Kobayashi. Her years of experience at the Legislature widened her circle of friends, associates, and contacts. This expanded network in the O‘ahu community has been an asset to Sharon’s career in real estate.

Sharon is currently active in several professional and community organizations, including the Hawai‘i International Real Estate Council, the Kahala Business Association, Soroptimist International-Honolulu, and Mālama O Mānoa. She has also served as the Director of the Honolulu Board of Realtors, from 1994 through 1996.

Sharon holds a Bachelor of Fine Arts degree from the University of Hawai‘i and has done graduate studies at the University of Illinois. She is married to Hector Venegas and is the mother of two grown daughters and grandmother to one granddaughter. She has been an avid student of Qi Gong since 1997 and Sharon is a successful jewelry designer in her leisure time.